“Be brave, finish the task, get it done and don’t look back!” is something that, this week, I've had to drill into my own skull. Procrastination shouldn't be a friend of mine, shouldn't even be a Facebook friend or Instagram viewer, but that darn person, that thing, the type of person within you often looks over the parapet of life and sniggers into your ear.

The world’s greatest mystery might be love between two consenting adults, that crazy struggle of hearts, but there’s also the mystery of why it takes us so long to do what we really want to do. I don’t, after all the years, get a kick from nine to five or even eight until late. I value freedom, creativity, the desire deep within smouldering away begging for you to let it loose into the world.

I've done just that, nearly, kind of, as it’s too late to back down now.  I wrote a book once, just over half way through my second when life jumped in the way but, after this next venture, I’ll get right back on that. Promise. Cross my heart. Etc. .

May I present to you all: 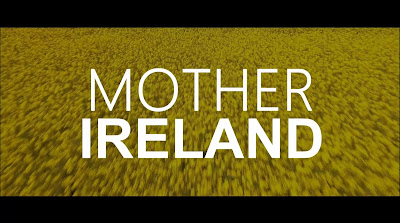 Over 8 hours of travelling, more than 2 hours of drone media, recording studio set-up, 2 more hours of recording my own face, editing the audio to remove most of the spikes and background hum and other stuff. 6 hours of editing and I've finally arrived at 23 minutes of video. Yes… that’s all!
This video is about life and what Ireland is to me. It’s simple, it’s about me opening my heart and showing weakness. It is, again, about life and… the end of that life. It’s quite sad, in a way beautiful, so hopefully you’ll take what you will from it.

Overall, there’s a serious message for everyone to understand.

Release date: This week. Check my Youtube channel for updates!

Sweat dripping down my face, breathing heavy, heart beating while trying to escape from my chest, another step is taken as eyes glance forward and up. Only another twenty heavy, unrelenting, savage slate steps to go before the shade can be reached. It’s one of the hottest days of the year, so far, thus deciding to scale the side of a mountain via slate created steps, which always seems like a great idea when presented as an adventure, isn't that wise. 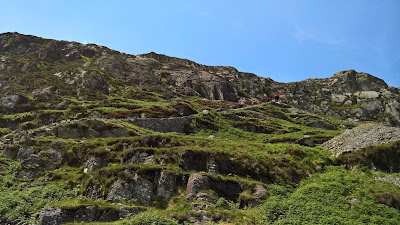 The sweat keeps on coming, as the shade appears and, sitting down, I can feel the sick feeling rise in my stomach, chest and head. I've pushed a bit too hard, willed my body to glance past limits or, another way of thinking about it, is that I'm not as fit as I used to be and it’s showing. Gym here I come. Being able to bench press x or y is no help in this place, surrounded by near silence, with a view to die for. Maybe literally. 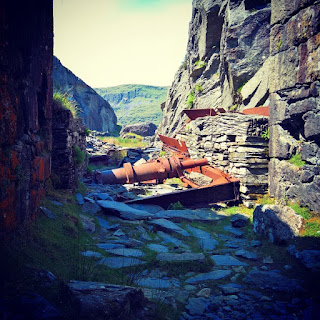 Breathing in through my nose, then out slowly through my mouth, I find a stable place and a smile rises onto my lips. The only time I've ever been ill was around the age of 16, forcing myself to scale that hill located in Cwm, without stopping once. I did it but fell to my knees and the rest is history. It’s good to push limits, it’s an exhalation of who you could be, should be, if you’d will your mind to push past its own safety limits.

Onwards, ever upwards, into the cave ahead and beyond. The cool air hits me, thankfully, but there’s no respite for my already weary legs. It’s Lucozade time. Believe it or not, being a mildly placid person that I am, Lucozade is usually ignored, as the stuff makes me angry. Blood flowing angry. It’s what I need as that anger can be turned into something needed to drive my legs.

The second wind appears as the sun literally beams down onto my frame. I need to buy a hat and, seeing as this was the first outing for my walking shoes, a hat could be a prudent decision and frankly quite wise. My eyes start to sting as the salty sweat finds its way into everything. 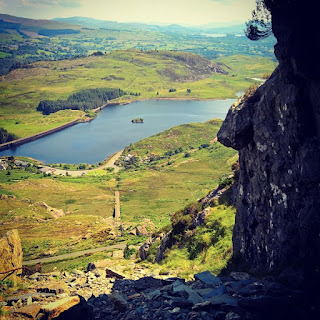 The top. It’s here. It’s grandeur impresses, even if it’s tried to kill me, I still move forward. There is an easy track, a very easy track, but why would you want to walk on that? You might miss something amazing which, as the drone is with me, sounds silly as I could just fly here! Real life, real views, real impressions is what I prefer. After all, if you’re going to go somewhere, really, really go there. Don’t waste any energy and make sure you’re satisfied along the way.

I have no chocolate, only a bottle of water, a dwindling bottle of crazy Lucozade and no hat. Better be quick as heat stroke is never a good thing. The view, this is what it’s for, the darn amazing view. We only have a select few days, in the U.K., that feature amazing weather so every single one of those days must be experienced. Of course, in my younger days, I didn’t see it quite like that but that was until the darn drone arrived.

Even though any financial setting, be it a castle, a few fields in the middle of nowhere, if there’s money involved you will not be able to bring your drone. It’s blatantly obvious now that I’ve been flying for a while, which is a shame, but that’s the way it is. Despite that there’s the hunt. You just want to get better, to grab beautiful shots and, on my varied travels, I’ve seen so many amazing settings. I’ve been to quite a few places around the world, with many more to come, but the United Kingdom, away from the crazy violence, bombs, attacks and other upsets, is beautiful.

All we have to do is believe, to explore, to venture forward, to see what’s out there. It will get you, one day, as the mind craves stimulation even though it denies it all.  I like bikes, I like drones, not a fan of running, but these places have opened my mind to many, many smiles. I’ve a drone life which, thankfully, gets me out there into the real world.