The tapping noise, emanating from all around, echoed through the house, through the halls and into the room where Daniel sat. Motionless, calm, sedate even, just listening to the ambience. Moving two of his fingers the pencil tapped, with the rhythm of the rain, on the page. Breathing in through his nose, slowly, then out of his mouth, he could feel his heartbeat slowing, the beats, all merging to the tapping of the rain, the pen and life. Tap, tap and another tap. Calm, almost creating a fever of pure silence, other than the zoned beats, he opened his eyes and decided to move from this exact spot within the house. 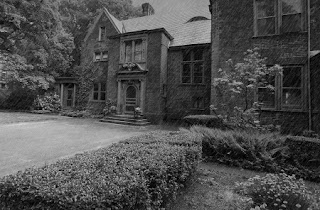 Walking along the long hallway, running his fingertips across the wall as he walked, he softened his gaze to again listen to the sounds around him. As his gaze softened he also turned his attention to the wall. Hundreds of small bumps smoothed past his senses as each fingertip glided. This was an old house, a prestigious house, lived in, a warmth emanating through the rooms and wooden rafters. He smiled as he imagined the happy times, the solemn times, the heart breaking moments and, of course, the love most certainly moulded over time.

Reaching the end of the hallway, Daniel glanced at the stairs, then started to climb the steep vertical mass of wood while holding onto the old banister.  Each footstep created its own unique sound, ensuring that no-one could ever sneak around this house. With each squeak he smiled a little more, actually trying to bypass the noise by placing a foot to the side of a few steps. Nothing worked which only added to the poignant ear moving moments.

Reaching the top of the stairs, slightly cramped, he lifted his arms slightly to press against the loft hatch and, with one swift movement, lifted the hatch and placed it to the left of the opening. Vanishing from his view, with a further tap of his hand, he braced himself as, with one leg positioned onto the small window sill next to him, he lifted himself into the loft and wobbled slightly as he lifted the rest of him into the loft. Mission accomplished, now surrounded by wooden beams, he stood, slightly stooped, looking out of the large window a few metres in from of him.

Lying on his back, the large window behind, with pencil and paper to his side, he again closed his eyes and just listened to the calm. To many the sound of rain would hardly convey a sense of calm but, to him, it meant that he could embrace his imagination, connect to his creative side, think of things that only a child would imagine. Earlier he’d day dreamed of flying, dreamed of souring into the heavens, but that was then and this is now.

Once again tapping his pencil onto the loft floor, in sync with the beating rain tapping away all around him, he imagined and caressed his thoughts. This house, like many homes, must have been a home of love. Each day, each weekend, every single year, a couple would sit, together, holding hands while laughing about the silly things they’d done in their youth. This wasn’t a place of conflict, a rhythm of pain, or solace, as the rooms were far too warm for any of that, this was an ideal made real. The paintings, in many of the rooms, displayed a wealth of prosperity. The rooms were painted with calm colours, noting nothing of a confused mind, with a garden meticulously maintained.

The rain kept on pouring over and around the house, never ending, never ceasing to create a rhythm of life. Daniel imagined that the couple, who owned the home, would hold each other in bed, just listening to the calm around them, rain or otherwise, as they shared their time together. It was a beautiful thought, a thought that he’d like to create, right there, right now. Mentally, most certainly physically, with his emotions agreeing, he would buy this house as soon as he possibly could. It didn’t matter that a few of the wires needed replacing, it wouldn’t bother him that the fences needed a lick of paint, as what he was looking for was a certain feeling. The rain spoke to him, in this house, unlike the other houses and, basically, he wanted to move into an emotion instead of bricks and mortar. This was for him, this would be for the both of them, as he had the final choice of the three selected by his partner. This was the one.

He truly, to his very core, knew that emotion played such an important part in life. No matter the rain, the clouds of life, no matter how many stairs they had to climb, as long as it was together they’d reach the finish line and, on that day, that very day, as long as it was raining just like today, with his hand in his partner’s hand, he’d smile until the very last second.

Closing his eyes, one more time before he knew that he had to attend to certain business aspects, he again listened to the rain. With each beat, he heard purpose, he could feel the smile and energy around him and he knew, he damn well knew, that today was going to be a fine day for rain.
Posted by Damian Jones at 07:35 No comments:

Looking through the window, into the street ahead, noticing the trees move as the dramatic wind tries to enforce its will onto the world. Alone, almost banished to this place, I need to become something new, a little bit more, of a thing designed to withstand this world that we inhabit. I might just need a hero. 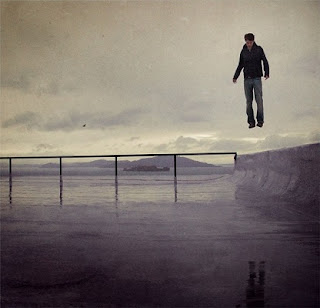 As a child I used to dream of flying, taking those initial steps backwards in order to create space, before running as fast as I could until the sky embraced my moving arms. In my dreams, my waking mind, it all seemed so easy. Life would lift you, kiss you when needed, rising your body to a place of tranquillity and escapism. I’d fly, over the rooftops, into the sky, feeling free above everything.

Life, unfortunately, grounds you, holding you there, forcing that will of subservience onto us all. I can feel the lines, not just across my face and under my eyes, as the lines are cracks forming within my resolve, I can feel them within my very soul. I stand stoic, as much as possible, as probable as it can all be, but to rise above all of this takes that small slice of energy.

Looking to the sky, asking for a healer of words, an action that resolves all inner conflict, I realise that the world is the one that is hurting. We’re hurting. We’re existing within a construct designed to keep us busy, defined, contained, restrained and controlled until the very day we pass from this world.

I return to the flying day dream as a smile appears across my lips. Wouldn’t it be amazing, wouldn’t it be fun? To fly, to soar, to escape. We’d probably be taxed on flying at that point. A wry grin appears, a small laugh acknowledging the sudden break and negativity injected into my thoughts. I didn’t think that way as a child, I didn’t know that the world is the way it is.

I don’t want to ignore the world, I don’t want to scream until my lungs ask me to stop, but the more I age the more I realise that we’re living in a twisted, dark, solemn world. Once you realise this prospect you can, thankfully, grasp at the beauty that we’re surrounded by. We have so many things to be thankful for yet, at times, we hardly even know they exist. The dark thin box, in the corner of our room, makes sure that we’re contained.

I said that I need a hero, a healer, a spark of light to infuse my mind as my heart has cut itself from my thinking. I need a hero, a true believer in another system of thinking, living, surviving and being. The fallacy of such a thought is that, in this world, our world, there’s no such thing as a hero. There are no super powers, there is no way for me to truly fly, on my own without technical aid and history knows that heroes, in human form, are often cut down before they could even try to fly.

Looking through the window, into the cold avenue of my own life, I notice that the trees are now static, no longer ruled by the circumstances of the moment. Alone, most certainly realising my situation, I know that I will become something brand new, a lot better, with light shining through my mind. I know that, right now, I need to become my own hero.
Posted by Damian Jones at 03:13 No comments: