She blinked, a few times, making it very obvious that she was holding back her emotions. He, however, let it go. All his life he’d been told that he was supposed to be a man, to stand tall, to be honest, reliable, to look for what’s right but this, this moment, it all seemed so very wrong. He could hear his Father’s words ringing in his ears but he denied the pressure, the scolding, so instead he let it go. A singular tear fell onto his cheek and rolled down his face. This, this thing that they had, was supposed to be forever. 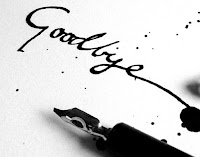 As a child he knew that boys were different to girls. Of course, yes, there were the obvious physical differences, but he was talking about how they were meant to act. Girls would be girls and boys would be boys but one day, like today, they all had to mature into something new, something… else. He didn't want to be the bad boy, the boy that kissed the girls and made them cry, but like all his friends, he had, he had made a few cry, so maybe this was where the universe made everything level.

She was leaving. She was leaving tomorrow, on a plane, quite possibly never to return. All of the words, all of the emotions, the motions, the never ending kisses in the mind’s eye and the words spoken within the dark nights, would soon end. This moment, right here, now, was the final goodbye.

He knew that although he was saying goodbye, they’d see each other again, one day, in another way, once a new sun had set. This, however, did not bring comfort as time has seldom been kind to lovers lost. Time. If only he had more time. Another tear, another moment, another trace of life left to dust, this was something that he’d never thought he’d live through.

Your heart beats, it rests, it’s given to another and feels in your chest. He’d split his heart in two, many years previous, but this was a clean break as the other part was given into her hands. She held his heart, caressed it with kisses, with warmth, with the very thought of missing and holding him. The pieces she held, he could see them, with his own imagination, shattering into a thousand shards of sharp, cutting, perilous pain.

For a second he actually put aside his feelings, the tears ceased and, like a person that truly understood what love meant, he asked her if she would be okay.   It mattered not how he felt, when he considered the situation, as love commanded that he consider the other person’s health and fortitude above his own. This was love. This was what it truly meant. To love is to provide a haven, a safe place to rest, to heal, then when the time comes, to wish your love well and let them go… with love. Anything else is selfish, self-serving, a failing, a truly sad place to be.

She knew that she would be okay, she had the support, she had the wealth of life and family behind her. Both standing, both embracing for the final time, he kissed her as if he held the last ember of air remaining in the world, trying to keep her alive for a second more. Fruitless, painful, but the endings never were kind for any soul within this world.

He sat as the door closed. This moment, right here, would strengthen him, would enliven his soul, it would ensure that he withstood the world to follow. He would be brave, he would be strong, he would brush aside the selfish wanderings of the mind and wish only wealth into the world. For everything, absolutely everything, there is a time.  Today, that time, meant goodbye. Tomorrow, the tears would no longer appear and a new world remains.

He would relish the goodbye, he would feed upon the happiness and laugh with the smiles. Goodbye was, after all, a new beginning.

A true story from my youth. Through life, through pain, through realising that love is kind, even when it hurts, you can come to understanding and accept nearly ANY decision made by a person that you love.  In my case she was taken out of the country by her family. Tough times.
Posted by Damian Jones at 13:36