Holding the door handle, for an extra second, trying to gather her thoughts, she hesitated and kept herself static. She reminded herself that life was for living, to experience, to hold and to enjoy. The door opened as she turned the handle, poised, stoic, game face more than ready. With a certain layer of sass, with the poetic walk that she’d perfected over the years, she calmly entered the room, tapped the door with her foot, which quickly closed and the game was afoot.

From across the room she noticed that he immediately stopped pouring the drink, mesmerised, taking in the view that she offered in abundance. If his lungs were full, at that moment, she’d have taken that breath away, slid it into her purse, thus leaving him breathless and wanting more. He was a powerful figure, not a middle man or a follower. He knew what he wanted and what he wanted was, of course, her. 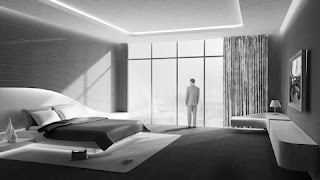 She’d been married for over 10 years, 10 wonderful, event free years and, because of this, she craved excitement and a little bit more from her life. With a smile, another quick glance that scaled her body like an imperial figure, he continued preparing the drinks. He could have gladly left them but that would have been rude. There was a game to play, the usual game, like a dance where both parties knew where it would end.

Walking across the room, they both met somewhere in the middle, both not wanting to feel their inner nerves. Her heart pounded against her chest, reminding her, screaming at her, to not let this moment go. ‘Embrace it’, it screamed, or was that her lust speaking. What was the point in having a fire, ready to burn the entire house down to the ground while never, ever, actually lighting said fire? Life was for adventure, for embraces, for hidden lingerie and dripping desire. She wanted this, needed this, desired this on all of the lonely nights spent waiting for declined visits.

Pleasantries were shared, exchanged, all pointless as no words need be spoken right about now. Both glasses remained empty as words simply faded, one into the other. The small voice, within her, voiced its concern. It glanced through her mind, revealing images of failure, of people asking her to stop, to forget the re-imaging of her heart. Love fades, love falters, grows old, becomes stagnant and seldom, ever, rekindles once gone. No, never, she couldn't believe that. She wouldn't believe that.

She silenced the voice, stepped forward, taking his lips onto hers. His cologne pushed itself into her senses, filling her with an extra incentive, tempting her with each second as she tasted his lips against hers. Placing a hand onto his chest, she could feel his body, taut, worked upon. He’d always kept himself in shape, even at his age. She reminded herself that a man that looked after his body would, always, be ready to share that body with vigour. His hands held onto her waist, pulling her forward, pressing her body to his and she felt her body race, her breathing deepen and heat rise.

She pulled away, looking into his eyes, fully embraced by her desire to have him. Raising her hand, she held onto his tie while unravelling the knot and he, in return, ripped open her thin blouse. Placing a hand behind his head she pushed him down as he cupped a breast within his warm hand and, with the other, reached around, flicking open her bra with one smooth gesture. She smiled, knowing that he’d done that before.

As the bra and shirt quickly met the floor he moved her against him, again, as he lifted her, spinning himself around, moving towards the chair. Both still breathing with heavy chests, like the air being breathed was the last remaining air in the world, he placed her onto the chair, fell to his knees and kissed her red lips again. She could feel his hand on her back as the other caressed her chest and, as he looked straight at her, with that look of want within his eyes, he moved his hands down and hitched up her skirt. With a smile he lowered his lips between her legs and started to use his tongue. Her mouth opened, ever so slightly, feeling him dart around her. Opening her eyes, looking across the room, she knew that she would never regret doing this.

This was for her, to keep the fire within her stomach, her heart, alive. After all, no matter what, this was what her lover was for.
Posted by Damian Jones at 11:30