Resting my head, onto my hands, as my legs rest on the cold concrete slabbed floor, I realise that I'm here for one specific reason. I can look back, to the past, the misdeeds, the missteps, the never-ending cursing of faith or ability but, when I've finished procrastinating, I'm still the reason why I'm here.
The rain, smashing against the walls outside the cell, seldom bringing comfort but at least it affords a moments relapse from the silence. That, alone, can be such a deadly place to be. Alone, solitarily confined within your own mind, waiting for a respite, but that seldom arrives once your own mind starts to tick away at your patience, strength and resolve. 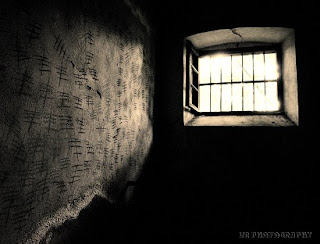 I often, while lying there, cold inside, think back to the decisions that I’d made. Should I have turned left, maybe the right side of right would have been best left alone, but we just sometimes do not know which way is left before looking to the right. Straight forward, the usual fast forward of life, grasping, shouting, thrusting forward with such strength in order to enforce the resolve of conviction, sometimes just destroys the very bridge you've created with our bare hands. It’s tough, it’s tragic, but it’s life. My life.

Lifting my heavy head, with cramping neck and trap muscles reminding me of the strain, I reach forward grasping at the thick black bars ahead of me. If I had the strength, the resolve, I’d use every ounce of my energy to escape this place. The bars, their imposing picture, become a constant reminder of the space just beyond my confinement.

The trouble with all of this, the very crux of the situation, the pondering insights into this very state of mind, is that I'm probably still here because a part of me doesn't want to leave. It’s safe, confined, away from the world, a palace of misery with no golden slipper at the end of the road. If I could turn anything into something else I just might. My companions, the stone walls, the dust, the shallow mattress, are all so perfectly safe. Maybe I'm deluded, promising myself that there’s bail just around the corner. A solution, a rescue, someone to take my problems away from me. Heaven knows I've placed my faith in others before, prescribed to them my perfect prescription of cocktailed comfort, but we all know that I'm the only one that can escape this place.

Using the bar to steady myself, I rise, slowly, to stand as tall as I possibly can. At any point, at any time of life, I can stand as I have just done, I can change my thinking and proclaim my innocence. It’s possible. I can dive, from this place, into an ocean of freedom. Sure, of course, I might not be able to swim once I get there but, amongst anything else that can be said, I’d prefer to try than die as I am in this place.

I know the solution, I know the issues within and the cause of this cancerous position that I'm in. I realise that my dis-ease will form the disease that finishes me off, so right now, this very second, I have to decide. I have to take a single, solitary, motionless second to change something, to change anything, but most of all I have to realise that this prison, this very place, is all in my own solitary mind. It’s up to me to simply… Break free.

So many people suffer from mental issues and, thankfully, there are millions of people that do care and ‘can’ care as many have been through situations or can at least try to appreciate or connect to those feelings.  There is hope and there always will be. Talk. Talk to yourself… Find an answer.