Waiting, patiently, daydreaming, while playing with a cuff link, he stood next to the door as people walked past his view. He wanted to tap his foot, giving in to his impatience, but he knew better than to allow his mind to take over his view of the current world. People watching, resolving their situations, playing a game within his mind imagining how each of them interacted with the people alongside them. 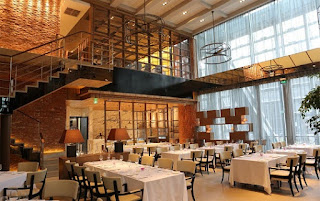 To his left, the table closest to the expansive glass building front, sat an elderly couple. Both silent, they themselves people watching, having lived an extensive life travelling the world. Perhaps they’d really seen it all, with nothing left to say other than timeless silence, but at least he could see that they were still holding hands. Both of them, viewing the world, taking in the youth around them, probably thinking that life was simpler back in their day. It was, more than likely, with a stiff slap across the head if you stepped out of line. He let a very small, silent, expressive smile appear on his lips for the briefest of seconds before composing himself.

The couple at the table, to his far right, by the cashier’s desk, looked vaguely dissatisfied. Probably annoyed at being so close to the main walkway or, more than likely, they’d had an argument. The man sat leaning back in his chair, arms crossed saying nothing as she tapped a rhythm of intent onto her phone. She was messaging, not texting as that’s yesterday’s thing, which meant a dinner picture probably sending itself into the world. All it would take is one second, one moment of compassion and understanding, for both of them to smile again but, of course, that would be far too easy.

Just next to the desk, the lift doors opened, with people flowing forth in their quick rush to be somewhere else. These were the high rollers, the type that wouldn’t stand for such a restaurant, despite it already being far above what people would call normal. This place was special, but where they arrived from, it probably all seemed mediocre. Divisions, lines, scales of balance, all meant to keep people segregated in an invisible whisper of diversity.

With a quick glance to his right, taking in the view, he caught a glimpse of a gentleman glued to his phone walking slowly to the male conveniences. Probably an Entrepreneur, wanting to be noticed, judging by the level of noise being made by his voice. Brash, with a stylish hair design, new, spotlessly clean, to the point of over indulgence. He'd caught the eye of a lady standing over by the bar, threw a wink and a smile her way, then opened the door and vanished as quickly as he’d arrived. The lady, returning to her drink, smile falling from her face, looked discomforted and, of course, alone.  Good looking, striking even, with just under shoulder length hair and an outfit to much her ability to gain male attention. The shoes, obviously matching her bag and accompanying accessories, added the extra significance and charm.

Returning his view, to carefully look ahead into the area, he brought his attention to himself. A quick look downwards at his shoes, which were still viciously clean, a wobble of his tie, meant that he was still as he should be. Clean, crisp, equally fresh as the start of the night, waiting for her to appear for the second time. He didn’t mind the wait, not even for a second, as this was what he was made for, his purpose, to ensure that they both experienced the night as intended. Warm laughter, a meal where they could both flirt over a glass of wine, while wondering when and where they could both be alone, again.

The door, beside him, opened with a small whoosh of sound and he quickly composed himself. She was beautiful, magnificent, to him, in every single way. Each time he saw her again, every second, just seemed to be that experience that he longed for. He knew, no matter what, that he did have a job to do but this was more than a job, it was a lifetime. All other situations, all other people, no longer mattered as much as they did before. She smiled and, as she placed the final small implements back into her purse, they both started to walk towards the door.

With two quick steps he’d closed the gap between them and the exit. With one swift motion, while checking the area outside, he opened the door with a smile. She smiled back at him, saying ‘thank you’, as he followed behind her closing the door as he went. He carried the smile with him, realising the ease at which he respected her as this, after all, is the least of what a husband should and could do.
Posted by Damian Jones at 05:50