Holding her head, with her hands, she looked at the floor as the tear fell. Time slowed to an indescribable pace, as it fell, with another following quickly after. It hurt. It had always hurt. But, as she knew, now was not the time for such tears and sorrow. “Just for a few seconds,” she whispered to no-one in particular, allowing herself the solitary solace of letting it all go. 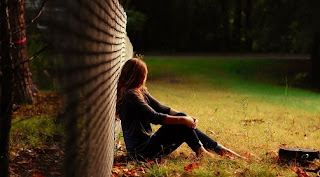 She’d lived a lifetime, possibly two if she believed her regression therapist, of loneliness and couldn't, even wouldn't, believe that it could happen over and over again. It wasn't due to being this, or that, as apparently, she had the looks, the stuff that the boys wanted, so why on earth did she often end up here, alone, crying in a corner, barely able to speak or contemplate the same situation. Repeat, repeat, the re-occurring circular drama and strife.

Her hands dropped away and she leaned back against the cold wall, looking at the ceiling, then out of the small window to her side. Being honest with herself, truly honest, she’d played it safe this time and yet it still didn't work. He wasn't exciting, he wasn't a dish of delight or even made her laugh. Options seemed thin, possibly due to her lifestyle and circumstance, so she’d decided to try safe, for awhile, normal, boring, yet even that failed.

She could feel her eyes, puffy, make-up probably running down her face, despite buying the expensive stuff that could withstand such things, but just like some men, the description often lies. Thinking of the past, the passed moments of her life, she’d reached a place where it was now or never, that ticking clock, that everyone often reminded her of, those nagging conformists that never, ever, stopped nagging. She wouldn't listen anyway, no matter how many times she was supposed to do this, or that, with him or her.

Her lip curled, just a little, reminding herself of what she’d given to her ‘ex’, the man that, twenty minutes previous, had declared his never-ending devotion and love. Life changed so fast, she knew this, with one second stretching to minutes, while years sometimes ending within that very same second. It had happened to her numerous times, to her friends, to her Brothers, to her very own parents. She knew that she was living in a time of serene ignorance. The throw away society to which, of course, she wanted no part of. She didn't ask for a warranty with her man, as all she wanted was for him to work with her, until the day they both broke and left this world.

Rubbing her eyes, removing the tears from the bottom of her face, she started to resolve the conflict inside of herself. This is what she did, often. It didn't matter, it wouldn't matter, as she knew that they were both healthy. He would now evaporate from her life, she would move on, start again, but maybe it was time for a new adventure. She closed her eyes, listening, slowing her breathing, to catch the sound of her own heart beating. It always reminded her of what she had, what she was given to enter this world. Her heart beating warmed her, embraced her, kept her warm when all others remained cold.

A smile appeared across her lips. It was that time, again, to rely on her own imagination. Every negative, sorrow filled moment, could be rationalised. Within reason. She’d cried, she’d let some of it go, with the remaining tears kept to remind her that she was worth so much more. She wasn't going to wallow in the never-ending solitude as, instead, she’d embrace this chance to realise that she was the only person that she needed for company.

She’d walked into a room filled with people, in the past, feeling so very lonely. She’d escaped from the few dates that quickly descended into a horrendous soul crushing escapade. She’d survived crying late into the night and now, today, she’d rise from this moment as well. Nothing, no-one, would ever, never ever, make her feel alone. That was an impossibility as she had her own heart, she had her own company, her own imagination and, above all, she had a beautiful soul.