There was a time, a long moment ago, when we spoke such words that even the oceans trembled at the mere thought of how we felt. Short, long, misconstructed or just blurted with free abundance, we just spoke until the day turned to night. 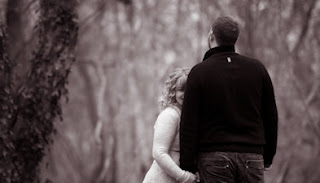 We shared, we gave everything away, with free ease, the stories melding one into another. If we closed our eyes we could live each other’s lives.  I could feel your footsteps, hear that heart of yours, taste the fear within the wishes that you’d always hoped would come true.

We wrote letters to each other, despite being able to see each other on any particular day. We just wanted to communicate, to share, to get each other. Each new word forming a cascading avalanche of expression. You opened my eyes and I, with you, opened all of the doors closed between us. We, you, with I, knew where we were going.

Then, on that one night, you told me your deepest, darkest, forbidden secrets and I, unlike others, didn't push you away or create a small wall destined to grow into something horrendous. I held you closer, I helped make us feel safer in this dark world of our own making. For the smallest second, the brief minute or two, we actually stopped talking and just… listened to the silence.

It was glorious, a stupor of indescribable splendour beyond all belief and our time. From whence it came we did not know and probably didn't care. We blessed each other, we cast aside our former sins and created new ones.

We watched as the world changed, becoming something different, fleeting connections becoming the norm, the standard, the level to which we must all attain and conform. We knew everything about each other, with moments of wonder still revealing themselves at random moments. The laughter, that laughter, was contagious.

As that world changed, we stayed the same, static and strong, a formidable team accomplishing deeds far outside the standard. We simply were. We didn't hold our heads high as we preferred to keep them level, stable, never believing that we were ever destined to somehow be any better than anyone else. Realistic, pragmatic, the rational two among the many.

The days moved forward, into the marriage of life, the connection of two with seldom a crossed word. Respect, after all, was the defining statement from the start and we understood. We knew this. After we left the building, the church on the day, you told me your dreams had arrived, the same said dreams from your youth, the dreams filled with a white dress and kisses.

This was what I needed, this was what we all wanted, the stability from within. If it not be found with another then we find it within ourselves but, when you've decided to spend years finding that stability, we both knew that a holding hand could be found from another.

We held hands, we held on with might, all the strength in the world never able to cut the bond we forged from within a thousand words, a hundred wishes and a billion kisses. It was, as said, glorious. All because we spoke to each other, defined ourselves with honesty and dignity, before jumping into the mess called life. All we had to do was talk to each other. All we had to do was be honest. We both knew that being honest could solve everything and anything.

All we had to do… was talk.

The photo, above, was kindly sent across by Rachel who owns her own Photography company. We're talking photos that make you smile!  Have a look if you have a moment and I'm sure to include a few more over the coming months.