She sat, in near silence, apart from the normal ambience that she’d become accustomed to. That didn't matter, it didn't even feature, in this place. A loud cough, from somewhere behind her, broke that small bit of concentration that she was holding on to. She knew what she wanted to do, could possibly do, but that was before her nerves started to play on her thoughts. 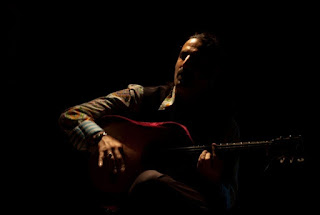 The smoke, being an outside garden next to the Hacienda's Taberna, also didn't really bother her. This was a private area, for Especial guests, to which she was thankful that she’d received an invite those months previous. She’d heard about the music here, the special melody, played by the mysterious man that they’d mentioned over and over again. He was silent, held himself in such a way that demanded attention, from any woman nearby.

Sure, of course, she didn’t believe in such things. There were handsome men, confident men, but hardly anything to bring home or to indulge with for more than a night’s circumstance. She’d seen it all. Heard it all. Played the games, enjoyed the tricks, desired the cravings and sent them all back.

The crowd, all sitting, relaxing, confident in their conversations with each other, began to calm with a few stragglers still at the bar. She heard the laughter, from jokes probably spoken in mild jest, but she wasn't here for any of that. She was here to hear the music and delight in the night’s offerings.

She looked down, checking her toenails, ensuring that the colour still remained. The little things, she knew, meant a lot. Confidence flowed from all corners of her world but, being prepared for as many situations as she could, ensured that extra slice of stability. Judging by the red dress that she wore, tonight, her thoughts were intending to control the eyes of every man in this place. If you had it, share it. She knew that there was nothing wrong with being a woman, beautiful, powerful, instantly demanding the time from her intended interest.

The bell rang, from behind the bar, a door opened and tonight’s entertainment arrived. Apparently, according to her colleagues, the friends in her life, this wasn't entertainment. It was an experience. Something to be remembered, even desired, not forgotten quickly and worthy of a repeat performance. This was why she was here, to enjoy the wine, to feel the music, to have her mind and body played like his glorious guitar. That, according to the whispers, was what she was going to get.

As he approached, walking slowly, the obvious confidence showing through the way he held himself, his eyes looking down. Apparently he, when ready, looked through the crowd and once he found inspiration, started to play. It was a forgone conclusion that he’d pick her tonight. She’d made sure of that. He sat, back sitting straight, on the edge of the chair. His left foot resting on a foot stool, guitar facing 45 degrees into the air. She watched as he shrugged his shoulders  for a short moment, his neck moving from left to right, with his shoulders eventually relaxing.

He looked up, through the crowd, taking in all of the faces in front of him. His eyes seemed so alive, intense, almost piercing through the people as he viewed them. Eventually, as expected, his eyes rested in her exact direction. She could feel her neck start to tingle, the effect of someone looking at her in the way he just did. A very small smile appeared, that you could almost miss, as he looked down at his guitar and started to play.

As the first note played she felt a warmth move over her. Maybe she was accustomed to music that wasn't live, maybe it was the two glasses of wine, or maybe it was the way his hands moved across the guitar. His fingertips moved so fast, effortlessly gliding to where they needed to be, as the Hermosa music played. It was mere seconds, hardly even a minute, when she realised that her friends were right about this man. The music. She’d never experienced this setting before.

As the Musica played, she ignored the smoke, she ignored the people speaking behind her, as her attention was firmly held in front. From nowhere she simply wanted him to look at her again, just as he’d done a few moment earlier, but there was nothing she could do to gather his attention. His eyes were closed, head moving with the music, but that still didn't stop her from wanting more. She recalled her friends, in another conversation, wishing that they were the guitar. Those hands gently, firmly, whatever the moment asked for, playing her Cuerpo with ease. A woman could imagine, a woman could desire, especially in a setting such as this.

She reminded herself to stay calm, to relax, as it was only music. It ‘was’ only music until, right then as she tried to distract herself, he looked over again. This time she met his gaze and held it there, for a few seconds, before his eyes started to take in her entire view. Sure, of course, her dress did display more leg than necessary, but this was the place for such decadence. She wanted to be noticed. It worked. No shame there despite his eyes literally tearing away everything she had on. Or, at least, that’s what his eyes were telling her.

As the music continued, rising in intensity, falling into her mind’s abyss, he finished the few songs and placed the guitar to the side, carefully, ensuring the stand held it in place. She wanted him to talk to her, to look at her that way again but, instead, he returned to where he had arrived from. For a second, she felt sadness envelop her thoughts but, as she was accustomed, she quickly moved those thoughts aside and reminded herself that this man, this guitar player, had basically desired her. Tonight was about her. Tonight she was the guitar, the beautifully orchestrated masterpiece of feeling and desire.