Standing outside of the main room, waiting, trying to feel relaxed, she simply felt the nerves eating at her sanity. She’d not had an actual invite but, at the very last moment, a person came through for her and here she was. Waiting. She’d selected the most appropriate dress, for the evening, long, backless, with that tempting hint of cleavage ready to impress. Matching shoes, the complimentary small purse and bag concoction that was seemingly in that week, as well as the suitable hair combination of curls and glamour. 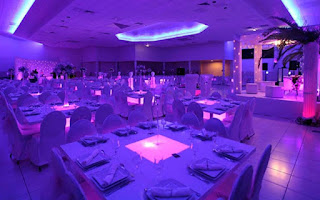 Deep down, from all of the years and past events, she knew that she was a good looking woman, modesty being removed from the equation, but that still didn't stop her from the worry, slight anxiety, as well as the constant nagging itch that something wasn't right. She’d often wonder why she couldn't just go with it, be how she was, but after years of side comments from previous partners it just couldn't be that way.

The doors opened. Light throwing itself into her eyes, as they quickly acclimatised, she stood still until the others pushed through the double doors. Last, as usual, into the event. A sudden rise of panic hit her mind but she inhaled, then exhaled quickly, as she ignored all of that and placed one foot in front of the other. This was it, hardly the most exciting thing in the world, but a room full of people did often agitate her into a wild bundle of panic.

Walking into the room she glanced across, taking in the surroundings. Fancy chandeliers, wooden floor, around 30 tables, plenty of people chatting and coughing, with a distant piano playing beautiful music. Table 27, apparently, was her table. She could feel the eyes looking at her. She was a woman, after all, so men looking at her just seemed to be ignored as you get used to such things, but in this instance she knew that women were also looking. Judging, not accepting her choice of dress, accompanying hand bag, or even her style of hair. She really didn't play that game. Women should support each other, not tear each other into strips of a catalogue defining how, where and when they should look or be. But, as she knew, she simply ignored all of that and kept her head held high despite the inner struggle and thoughts.

Her roller-coaster mind kept on going, thinking, demanding attention, while her outgoing person simply smiled and said hello to each person that caught her gaze. So far, so good. She hadn't fallen over, walked into anything, snapped a heel or kicked anyone’s bag. Turning her thoughts around she started thinking positive thoughts. She was here, in the room, glowing, happy, smiling, looking damn good, despite feeling a small bit of guilt for thinking that way, but the truth was just that.

Reaching her table, feeling like a marathon had just been undertaken, she knew where she was sitting as there was only one chair left. As the people at the table looked in her direction a gentleman, who would be sitting to her left, jumped up and pulled out the chair. She’d thought that those days were long gone, the gentleman, the guy that knew the importance of a woman, given way to the politically correct madness. That was nice. Appreciated. She nodded and said ‘thank you’ as he moved the chair slightly forward as she sat.  ‘Let the grilling begin’, she said to herself and no-one else in particular. From her right side a waiter appeared with a wine bottle and that, especially that, would be appreciated right about now. It was bad enough attending such an event on her own, but with no wine? Madness. Utter madness.

As she glanced around the table, knowing that virtually every single male had, in the first ten seconds, noticed her cleavage, then her face, she gulped down the wine as she was sure no-one had noticed. They were chatting, amongst each other, laughing, bonding, as she quickly listened to each conversation. Who was kind, who was showing off, which of them were like her and more. From across the table, the loudest male, with probably the largest ego and smallest ‘package’, piped up, “Now that we all know each other, how about the new lady at the table?” She could feel herself turn a slight shade of red but, before she let that control her, she quickly replied,
“Me? I’m here for more of this!” to which she leaned forward, grasped the wine bottle and filled her glass. The table laughed,
“Cheers to that,” he replied.

She knew, now that all of that was over with, that the night would be an absolute blast.