Daniel touched the glowing orb, feeling the resonance flow through his fingertips, up his arm, spreading to his entire body. He knew that he wasn't supposed to be in this part of the building, let alone this room, which would inflict severe consequences if he were to be found. If he were being honest, even as a child, this area was the brightest beacon to his moth like tendencies. A rule breaker, a truth speaker, the jewel in his Mother’s eye and ever so cheeky. This, however, was far beyond where his adventures had previously led him. 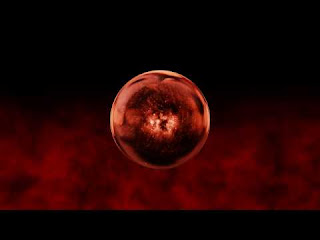 Feeling brave, as his five fingers wrapped around the orb, he lifted the item and felt an even greater surge of power. He’d called it power but, as information about this thing was hardly easy to find, he truly did not know what it was doing to him. Bringing it closer, to inspect the fine detail, his eyes focused on the lines, be they inscriptions of some sort, a map, or something that he’d never seen before. The technology of his world, this world, was shrouded in secrecy and although they did use such things to make life easier, they all led that peaceable life. He’d use another word, along the lines of boring, but that wouldn't be spoken out loud as he appreciated the serene complexity of things.

As he brought the orb closer, smiling as the blue aura flowed around his hand, from the object, he felt it move. Increasing his grip, attempting to move it away from him, it suddenly moved towards his chest and, with a thump, struck dead centre and started to press against his sternum. At first he could feel the pressure, then the pain started to increase. If he’d not started to panic he might have noticed that the orb’s energy had changed to red. Hardly important to him, right at this moment, as he’d never felt pain like this as the orb kept on pressing. He heard a crack, the world began to spin, then his view turned dark as he fell backwards, passing out.

His eyes started to open, slowly, his mind trying to grasp what had just happened. Placing a hand to his chest, feeling, he felt nothing, no pain at all. He looked up, around the room, with silence greeting him and, as he stood, he steadied himself against the pedestal that the orb rested upon. His balance was off, slightly, probably from knocking the back of his head when he fell. Dusting off his clothes, wondering what on earth just happened, he turned and walked out of the room. Reaching the corner of the hallway, he looked left and right, reaching into his pocket to find his home-made security hack device. With the click of a button, double checking the status, he confirmed that he could run across. The area was sparse, due to the nature of what it held inside, whatever it was, with white walls and nothing in between. Reaching the other side, clicking the device again, the security measures reset and he calmly walked out of the complex.

Feeling confident, while walking through the crowds of people musing their intended purchases, he felt the market’s energy. There was always a healthy hustle and bustle in this area of the city, which he loved, especially when he’d been extra damn mischievous. He’d gotten away with a lot in his life, even at his young age of 19, with a few moments of being scolded. This, however, was one of his more risqué moments. With a nod, to his Friend Simon, who had been waiting for him, they both continued through the market as Simon asked him questions, “Did you get it?” asked Simon.
“Yeah,” replied Daniel, “but I lost it!”
“How did you do that?”
“You know me, a mystery!”

Daniel had been friends with Simon since coming into this world and, although Simon was smaller he was built for pure speed. He’d never seen someone move as quickly as Simon. He was nearly as quick as a Bullchap runner and that was saying something.


Simon dropped the stone, that he’d been messing with while waiting for Daniel, to his side. He’d wanted to see, or know, what was in the building for the longest time. Such a large space, with so many methods to keep people out, yet Daniel had, as usual, solved the mystery,
“What was it like?” asked Simon.
“The only thing in there was an Orb that glowed. I picked it up and I must have fallen backwards as it hit me in the chest and I passed out?”
Simon, not one to ask many questions, nodded. He also knew Daniel. He knew when he wasn't telling the entire story but, respectfully, he knew not to continue digging as he wasn't going to get anything else from him. For now. Eventually, as time moved, he knew that Simon would fill in the blanks as he simply couldn't help himself.  Daniel didn't like lying, but in this case he wasn't lying as, instead, he was leaving bits out as to not worry Simon. He’d tell him, eventually, just not now. Reaching the market’s junction point, he nodded to Simon and they split. It was late, time to go home.

The first thing he had to do, tomorrow morning, was break into the lab where they held the secret scanning machine as he, after all that had taken place, needed to know what happened and he had a sneaking suspicion he’d find answers there. He wasn't scared, not one bit, as life was for adventure and if this led to adventure, then he was all for that.

This would be TV pilot with the ending being on Earth. After he manages to scan himself he finds the orb wrapped around his heart which does something to his blood stream. When the planet is attacked, due to his messing with the orb, he hits his chest and is teleported to Earth. His Mother arrives, after awhile, telling him that his world has been basically destroyed. Heavy stuff. We then move forward with him finding out the special abilities as the enemy eventually arrives, after scouting the planet. etc. Usual Sci-Fi stuff.