The emotion left me, draining away at a speed I could barely fathom, lips turning purple as my breathing faltered. At this point in time I simply did not know what to do. Should I say something, fight fire with the real flames of my mind, or should I simply rise from the ground that hit me so very, very hard. Abraxos smirked, standing near the door from which he’d struck me from behind. The coward, the snake within the very lives we loved, always scheming and creating lies. I trusted him, loved him as a Brother, to which he repaid all of us with the crimes of hate. 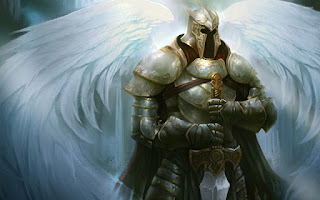 “Brother,” shouted Abraxos as loud as he could, “Welcome to the new world order of my making!” Dusting the speckles of concrete from my clothes, eager to show some type of respect for myself, I stood and clenched my fists. If I could I would beat him until the sun removed itself from the sky but, according to my will and the testament of my soul, I could not do such a thing. We were Angels, the scribed protectors of every single sacred soul. We were supposed to be more. We were… .

“Abraxos, why do you do this?  We are but three left upon this world?” I proclaimed with the sincerity of a broken heart.
“Don’t you mean, ‘we are but two’ upon this world?” he replied with a smug demeanour. The words cracked my heart into the thousand slices of aching. My eyes closed, my tears formed and my mouth opened with unbelievable pain. I fell again. Her face flashed before my very memory, tearing into my peaceful ways. I was no match for him. I knew this. We both knew this. I was a scribe, a writer of ways, the bringer of knowledge but that didn't mean that I couldn't inflict chaos upon his mortal like frame. The thoughts danced within my view, her lips, my wings keeping her warm upon this world over the centuries of dark rule. The pain.

The pain. Every muscle within my frame tightened with savage rage as I finally let loose the scream that shattered a thousand panes of glass. My head fell and, as I tried before, I rose from the ground. I looked at him, I wished for my gaze to rip him into nothingness. He had taken everything. Every single last moment destroyed. Her fingertips, gone, her words, missing, her touch, never to be mine again.
“Come, Brother, Abraxos will have words with you!” he mocked. I flew forward as fast as my wings would allow, with the feathers bending with such force the walls within this room fell. For a second he looked shocked, not realising that rage within a person knew no bounds. Both my fists struck his frame sending both of us flying outside, smashing through another building only to land in the adjacent field. I scrambled to my feet, grasping his throat, lifting him, striking him, again and again. He laughed. He simply laughed.

I saw her face, again, within my mind and I let go of his neck, to step back a few paces. It was no use. It was futile. I would die for her, end my existence for her, take any blow within this world as nothing could hurt as much as this.  “Well done my Friend, a valiant try,” he quipped, with possibly some honesty within his words, “You know that you never had a chance. The Archangel, the first, cannot leave this world!” He was right, we both knew this, but a scribe uses more than his fists when faced with a foe that knows no boundaries. I smiled, knowing that I’d actually won the battle despite my own life ending within the mere moments of pause.

Abraxos looked down, still smiling, only to see the small Angel Blade thrust deep into his chest. Being completely immortal meant that you hardly ever felt pain but this, the mortal blow, would end him in the most horrific way. I stepped forward knowing my end would begin, “You’ve lost, your power will soon no longer be yours my Friend. You’ll walk through this world never being able to die. But never able to fly, or see the Threads of life, you will be nothing!” I wanted to laugh as he removed the blade, his spark of life exposed, ready to move forward to another. The rage within his eyes grew, the ground began to tremble. Any second my life would end, my silence assured, my way to the next life of perfection. With a near slow motion view I relaxed as the real Angel Blades struck my neck. Ending me. Ending my life. The Angels we knew were no more. Now it’s your chance, humanities chance, to make things better.

Apparently it took 37 minutes to write/edit the above post. Including checking twice, finding the picture etc.