The lights flickered, straining her eyes as she held her fear in her throat. Water, dripping down the walls on each side, she knew that she couldn't retreat as she’d just fallen into this corridor from above. It wasn't the longest corridor, despite the thin lighting failing to present all detail but what she could see, clearly, was the figure in front of her, in front of the only exit. 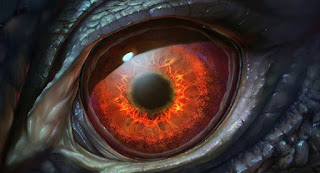 She’d heard the screams, the others screaming at the top of their lungs, so she was confident that the thing in front of her wasn't just going to let her leave. She felt the fear eating at her, willing her to cower in the corner, to close her eyes in a vain attempt to escape but this wasn't going to happen. The water, up to her waist, meant that there wasn't any corner to hide. It was either forward or… she held that thought for a second, frantically looking around for a second time. Nothing, just pipes, walls and water. A wall behind her and everything in view to her front.

Whatever it was it breathed the same air as her, judging by the condensation on its exhaled breath, which didn't make anything any easier. Dark skinned, like any reptile type creature, with two dark eyes as far as she could tell. It was large, maybe twice the size of her, which increased her wish to cry as she kept on looking at the thing. Slowly it opened its hands, exposing long nails. Her bottom lip started to shake as she realised that the word nails, didn't do the talons justice. As the fear grew she could swear that it had started to smile as it exposed the sharpest set of canines she’d ever seen.

An hour before she was calmly browsing a store catalogue, minding her own business, until her boyfriend had arrived with a few other characters. He had a supposed business deal, not too far away, so wondered if she’d like to accompany them. She didn't, as she’d rather just do what they’d planned, but being her, she’d simply stated yes and, as usual, done exactly what he wanted. The next minute they were heading along a very old underground passage. The rest, as well as the screams and running were then and this, this thing in front of her, was now.

She knew that she had little choice, or no choice at all, but to summon the inner strength to face this thing in front of her. The hardest thing in the world that she’d faced, so far, was simply saying no or to even escape something she simply no longer accepted. She’d been a passenger in her own life, directed by many others, defined, no one bothering to refine their time to see her real qualities, but that was also beside the point. For once in her life, right this second, she had no choice but to face things. This thing. That monster that we all never wished to meet. Being inquisitive, but usually remaining quiet, she really wanted to know where it had come from but, thinking things like that, wouldn't help with the fear. So many thoughts, with the few seconds remaining, she wished that she’d learnt to silence that enemy within her mind.

She stepped forward, just one footstep, but the thing growled as it lifted its arm, running a nail along a pipe. The sound echoed through the passage as she winced. Another step forward, another chance to escape. The monster in front did something that she’d never expect and, as she placed another foot forward it stepped backwards. A flicker of hope arose within her adrenaline filled body, as she held her head up, rubbing away a couple of tears that had appeared in the last few seconds. If this was to be her last few minutes on this world, she’d darn well want them to be brave moments.
Her fists, clenched tight, held firm as she moved ever closer. The thing, now next to the steps in front of the exit, couldn't move back any further. She moved forward again, then again, until she was literally within a footstep of the monster. She stared into its cold eyes, trying to see anything, a sign of aggression, fear, but nothing seemed to be behind its dark face. Maybe it was a moment of madness, or a moment of insanity, but she lent forward and with anger in her voice stated words that she’d wanted to say to many people on many occasions, “I'm not afraid of you! Nothing you can do will hurt me forever.”

The silence, despite the dripping water, seemed deafening as time slowed to a crawl. She realised that, for once, she felt no fear. None. Not even one scrap of foreboding pain. Her lip had stopped moving, her fingers relaxing, as the monster moved to the left side of the passage. She mirrored the thing and, without once letting its eyes leave her sight, she moved to the right. Lifting her arm, half expecting the thing to rip her throat away from her body at any second, she pressed the door’s safety bar and, thankfully, it opened as it should. Walking backwards up the few steps, through the door, she closed it behind her. Turning, walking slowly, she held her calm and never looked back. For the first time in her life, for once, which would forever change that life, she had finally beaten the Monster within.  She’d smile, she’d laugh, but not yet. Not just yet.