The fragrance lingered in the air as he stopped. Everything stopped. The ticking clock against the far wall, often ignored, seemed to slow to a crawl. Each tick taking longer and longer as he closed his eyes. Enjoying. Reminiscing. Remembering the night before. 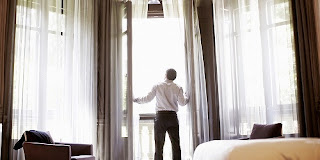 It had been a solitary business trip, nothing out of the ordinary, with the specific destinations defined upon the many emails and print outs residing within his digital life. The plane journey went without issue, the landing appearing faster than he’d imagined or, alternatively, he was getting used to the trip that little bit too much.

The day had moved so fast, his beating heart hardly even stopping to take a moments rest. He worked hard, damn hard, but he was specifically talented at what he did. He excelled, always trying to improve, never letting complacency take hold of his life. That alone, the thought of becoming that person, kept him at the top of his chosen game. All done, all resolved, everyone happy and the working day ended as expected.

All parties happy, invitations extended, he somehow managed to arrive at a château of immense grandeur. Alone, walking with confidence, he relished the experience of visiting new places, to see those new faces, the smiles, the people watching of life and learning. Entering the main room, a grand spectacle that would have taken his breath away but, instead, he simply raised an eyebrow to appreciate his surroundings. Lush furniture, extravagant paintings and extras, all added to the moment.

Wine flowed freely, the laughter intoxicating, allowing his stance and defences to lower ever so slightly. Working, as he did, could often mean that he needed to be reminded that you could have fun, you could play, while allowing the work to go as planned. The lonely life, the solitary confinement of his existence, meant that he did actually enjoy the chance to let his guard down. All the way.

As usual, not that he planned such things, he caught the eye of a few female, as well as male, guests at the event. He wasn't short of admirers but, not that he’d admit it, he didn't want to believe that looks defined most initial events. He wanted to believe that personality, when all the clothes had been removed, truly brought forward the real desire above all of the floundering bedroom adventures. He laughed within his mind, realising that, at times, he really shouldn't think so much. The adventure, the experience, the excitement of every single new day, was all that mattered.

The hours flew away, speaking to many people, flirting, being flirted with, a few serious conversations and more. He’d eventually, accidentally, walked into a woman that most certainly caught his eye, her perfume enticing him. They exchanged pleasantries, talked about the world, righted so many wrongs, talked in French, a little German, showing off to each other, before retiring to a room at the far side of the building.

No words were then exchanged, for at least another few hours, until the night stole the remaining time and sent them to sleep. By the time he awoke she’d gone, leaving her number, a kiss upon an envelope, as well as the fragrance that stopped him. Reminded him. The aroma that brought the events of the previous night back into his mind. All of this, the adventure, the meeting of minds, the warmth of another pressed against him, made all of this world worthwhile.

Time returned to normal, the ticking returning to the usual speed, as he carried on getting ready to leave. Once more, just as he left, he stopped and turned to look at the room taking in everything. He wanted to remember, to always view this place as somewhere special. The fragrance still adding pause to his actions, he smiled, turned, lifted his phone and sent a message, ‘I’d like to know what perfume you used last night, as well as this morning, but please tell me in person. When you can! xxxx’