Jack placed one hand onto the floor, with the other hand pressing against the side of his head, wishing and hoping that it would somehow stop the pain from within his mind. He coughed a few times, sending the muscles alongside the back of his head into spasm. The pain flexed into his mind, mixing with the thumping agony as another cough sent small drops of blood out onto the clear white floor below him. 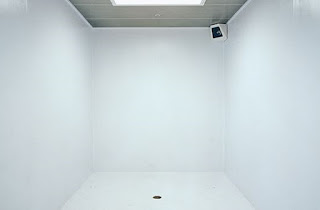 He was in isolation, quarantine, surrounded by nothing but white plastic and a white blue light to keep him company. He slowly fell forward, no longer able to hold himself in place, his chin resting against the floor as all effort and struggle stopped. He moved his toes, just a little, trying anything to keep a semblance of hope at the vain chance of a reprieve.

He smiled, for a brief second, as the numbing pain reminded him of his situation, location and chance of recovery. He’d laugh, even cry, if he could summon the energy to do so. He’d signed his life away, on that dotted line, to become one of the few to undertake this discovery session. If he could, he’d most certainly decide to stay at the morning restaurant, eating those delicious flakes that he so dearly wished for at this second in time. He’d do anything, say anything, maybe even kill anyone, to escape the pain.

He winced, as a particularly nasty thump hit the side of his skull, from within. He rolled onto his back, to almost immediately regret the decision, as the contents of his stomach threatened to escape as he wretched. He moved to his side, feeling the contents of his mouth escape past his lips. He slowly moved a hand, to rub his face, only to find that the content was, again, thick red blood.

He coughed again, the aggressive nature of whatever was within, becoming all too realistic. He forced himself to move past the pain, to imagine somewhere else, anywhere else, returning to that place, the place, he held so close to him as a child. A simplistic view, a realistic place. A field of long corn, reaching into the sky to appear just below his chest. He was so young at that time, the moments of simplicity and carefree exuberance. He could feel the corn against his hand, as his fingers skipped over the corn as he walked towards the tree that was sat within the expansive field.

He sat, looking off into the distance, his hand within the present moment, within the isolation cell, raised into the air as he embraced the moment of escapism. He smiled, as the blood trickled over his lips and emotion. For a second, he felt his mind lapse, escape, become free from the moment of pain, sorrow and futility. He loved this place, that place, a place that probably no longer existed. It mattered not as, right at that moment, he’d smiled. He’d felt the escape afforded to his body, until the door across from him opened.

His imagination snapped back to the present moment, his head returning to its thundering crescendo, as his eyes focused upon the person being thrown into the iso-cell. A woman, another person, another soul welcomed into his pain and suffering. He moved from his side, slowly, carefully, trying not to allow his mind to seize onto the possibility of further, breaking, pain. With the most effort he could afford, he dragged himself across the cell to the other side, away from the new person.

He poised himself onto the cell’s wall with his back, his head thumping as he glanced across to the new occupant. He’d speak, he’d say something, anything, but the words simply did not arrive to him as he’d like. He watched with interest, his breathing shallow and broken, as she lifted herself from her crumpled state. Moving her hair to the side, she looked at him, her head down, afraid, wondering what was happening.

“Who are you?” she asked, the confusion present within her voice.

She placed a hand onto the floor, moving her body towards him.

“I know,” she replied, sending his mind into confusion. He would ask questions, wishing to know more, if anything, of what she’d seen, what she’d witnessed but, instead, his thumping mind simply would not permit further discussion.

She moved forward again. Dragging herself. He looked at her legs, noticing that her feet were black and blue, covered with bruising unlike he’d ever seen. Another lab rat, another willing participant within the black, sick, twisted world of answers that needed the important questions. She moved ever closer, as his mind wished for her to stop.

His emotion cracked, his resolve broke, as she reached him, holding his hand. She turned, ever so slightly, wrapping her arms around him, as her legs moved up against her chest.
“You’re okay! You will be okay!” she said, with the pure emotion of her very heart escaping with her words.

He felt his heart break, his soul crack in two, as he finally gave in to the torture of the life he’d allowed into his waking breath. Images flashed into his eyes, his final moments, his every need, want and desire within the world, with his emotion pouring out of him as their auras bonded and the connection formed.

He’d always been a proud person, the one to stand tall through anything and everything, but in this very moment, he could no longer hold the pretence together, “I’m scared. I’m so scared.” He placed his arms around her, holding her close, as she raised her head, placing it against his upper chest. He felt the comfort, her embrace, the fear felt by the both of them as his breathing slowed to a soft, calm crawl. He closed his eyes, feeling the warmth created by the both of them, the safety within the arms and comfort of another person that understood, that realised, that no trauma should be felt alone.

He felt his mind soften, his pulse relax, as the thumping within his head started to fade. He’d felt this calm, a few seconds ago within the field of his younger self’s memory, but this moment was beyond anything he’d ever felt. All defences, gone, all machinations, defeated, with only the unity of two people together removing the fear of life, as well as death.

The calm within him, the echo of the past few days faded, as his energy started to lift and the mind fog fade. He couldn’t believe what was happening.

Jeff, from within the monitoring room, typed his report.
‘Subject twelve immediately responded to the stability afforded by another. He, however, started to stabilise moments before via a currently unknown mental process. Further study is required. It seems that the human condition can be controlled via external emotional connectivity. All pain, panic and trauma cleared within one minute of the embrace. Trial twelve is now 95% complete’