Normally, with her calm demeanour being complemented, she’d listen to the majestic music instead of being beautifully distracted. She’d hum the chorus, embracing each word and rhythm, but at this very second her thoughts seemed to be struggling. He, of course, was the source of her predicament. 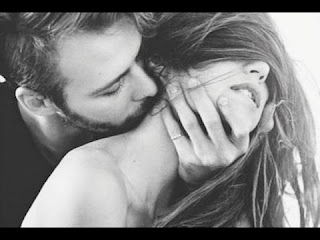 With each word musically expressed, she could feel his lips upon her skin. Moving, gracefully, almost flowing with the background’s musical score. She smiled, placing her wine to the side of her, allowing her focus to simply be whatever it wished to be. It was the weekend, the end of the working days.

She closed her eyes, her ears simply rejoicing at the calm bestowed to her mind’s way of thinking and, of course, those lips. Those heavenly, seductive, tempting lips. He had a way about him, a sort of almost devilish charm, yet that was nothing compared to what he hid behind that smile of his.

The seconds escaped, evaporating as easily as the winter snow outside. The warm fireplace, just across the room to her left, provided the glow and the wine simply permitted her that extra allowance of freedom. He stopped kissing her back and, pressing his frame to hers, he gently moved her head to the side, to rest her against his hand. She expressed her satisfaction with an ever so slight vocal gesture. A small moan, as it were.

He started, gently, ever so carefully, to kiss her neck. Starting lower down, he moved his lips with ease as he pressed kisses to her skin. They felt like small slices of heaven, served upon a tray of warm emotion, as he continued. Moving along that skin of hers, he pressed that little bit more, his lips collecting her reaction to his warmth.

Again and again, he kissed her neck, as his hand let go of her head, to instead wrap around her waist. He drew her closer to him, embracing her, as she turned her head ever so slightly to allow his lips to find hers. Their lips met, embracing the moment, as he moved his lips away from hers, gently nudging her head to the other side. His lips, once again, found a canvas of skin to write his wishes upon. Each kiss, a word. Each motive, explanatory to her imagination.

She could feel her legs grow weaker by the second, as she felt those goosebumps start to appear upon her lower arms. She could so easily turn, to eat that slice of cake, but that wouldn’t do as she ideally wanted the whole thing. If he were cake, he’d have been devoured weeks before this very moment.

He simply knew her, had listened to her, with her actual desires being met, restored and conquered with such vigour that even the gods above must have looked away. He had time, that type of time, to simply kiss her neck with no other objective but her own pleasure. It was an unknown quantity, that resided within him and seemingly no other. Each time he kissed her neck, pressed his lips to her needing skin, she felt her entire body start to relax. Each time he touched her neck, it was almost the seconds of making love completely enraptured, within that singular expression.

Her hand found his, embracing fingers entwining together as she finally reached the point of complete, depraved, desire laden, wanton indulgence. His lips continued to find her secret places of susceptibility, embracing every single source of her hidden buttons, as he pressed his lips together again and again.

She felt her body find her wild desire and, finally, give herself the very thing she wanted. She moved from the chair, turning as she stood, only to return to straddle him. As she placed him within her, she exhaled slightly, once again taking his warm lips against hers. She could feel him, embrace him, as she looked into his eyes. Moving her hair to her right side, she smiled. He knew his orders, and those orders were to continue kissing her sensitive, beautiful, perfect neck.

Click HERE To Listen
Posted by Damian Jones at 13:14