The rest of the story, the history of ages and the wealth of events before this very moment, were all distant spoken words and actions. None of that mattered and, often, never did after the present events unfolded into waking seconds. He was ready, willing, the exploratory method and possible madness of his motivations moving him ever forward. He had waited patiently and now, finally, he would have what he’d wanted for the longest of smiles. 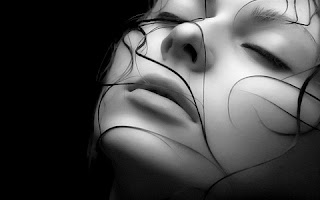 Casually, effortlessly, he placed himself between the legs and lowered his head. His lips, wanting, waiting, eager to please, prepared themselves for what was ahead.  Such a task, an ever-willing patience to please, his lips parted, as his hands found what they needed to find. He tasted the distance between them, the void soon to become nothing more than space.

His tongue moved and, as he gently flicked, the picture of his imagination became real. The start of something new, the bridging of two people, forming another connection amongst the many already formed. He flicked again, his strokes becoming more than before. He knew that he had to be patient. All good things, as they said, would come to those that knew what they were doing. Practised, established, the confidence sounding from within the calm.

He moved his head, ever so slightly, to the side. His eyes, looking up and over to see her staring into his. She was that heavenly creature. The imperfect perfection, that he’d wanted for the longest of imaginary moments. Her breasts, taunting him, the curves yet to be scribed upon his page of creation. His mind screamed for him to complete the task at hand, but the ever-present notion of patience once again, reminded him to find his calm.

He knew, more than most, that there was an ideal image for everyone. That person, the heart that caressed and cajoled. She was here, in front of him, still, expectant, and more than willing. He could see her smile grow as he moved. Up, down, the variation forming. His heart, finding calm, as he placed his every thought into making the moment happen. He gripped the left leg and squeezed ever softly, as a reminder, to ground himself upon the revelation of events.

There were gifts within the world, moments that were more than the mortal passing of a fleeting affection. There was love, that created life within the strife of a person’s daily thoughts. She’d fuelled his desire to be more than he could ever be. The pride, the respect, the sheer vibration from her obvious smile, filling him with such strength that he, for once, knew exactly what he was meant to be. What he was made for. The holding of a hand should never, ever, be taken as a light transitory gift. It was special, glowing, magical and not just meant for Kings and Queens.

He moved again, keeping the rhythm, the steady pace as his lips again passed his intentions onto her canvas of purity. She wanted to move, to thrash around, to lose herself, but he had given her the strict instructions of obedience, when he was undertaking such a task. She, gladly and thankfully, agreed to abide by his seductive instructions.

As the seconds moved, they could both feel the conclusion approaching. His heart beat faster as, finally, he finished his masterpiece. He leant back, letting go of the leg, more than happy at the spectacles in front of his moving eyes. His heart slowed, as his emotions flowed within him. He nodded, allowing her to move from the setting. She approached, cautious, excited, the mystery soon to unfold. With her hands pressed together, in front of her mouth, she looked around the easel and, as her hands dropped, her shock and impressed emotions poured forward.

He had, after all of the years waiting, finally painted a picture of perfection upon a blank page.

Click HERE to listen
Posted by Damian Jones at 08:41