Daniel pressed his back against the wooden frame, exhaling, preparing to exclaim all his deeds of indulgent pleasure. He would have prepared a list but, in the event of such a list being found, he might not be able to raise his head ever again. Sure, the knowing glint would remain within his shallow smirk and dark, deep eyes, but secrets would always remain between thy maker and soul. 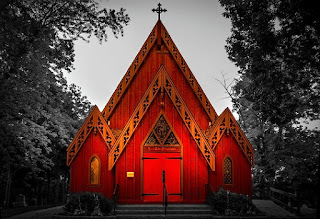 He’d been called the filthiest, most disgusting names you could ever imagine, by the vilest villains that hid their own indiscretions behind a veil of lies and deceit. He had laughed at all of them, reminding himself, that he’d selectively chosen a few of the Seven Deadly Sins to scribe and delight his very soul. Maybe they were right. Something within him, had worked its way to the surface, ignoring the gloriously inconspicuous distance between heaven and sin.

The gluttonous greed, the sloth of indifference, encompassed within the vengeful wrath of pride and most of all, beyond all others, the sinning envy of lusciously capacious lust. He could write sonnets, stories above all, as well as paint within the walls of the holiest places. It was okay. Perfectly fine. Above board and most of all, no lies would have been told. He knew that he could sin, without uttering even one wrong from his lips. He was, when confronted, a powerful spectre of a man. He embraced all of it. The strength, the power, the possession of another’s heart, soul and mind.

He was sorry, to an extent, of ignoring the golden scriptures of degeneration. They, simply, no longer worked as intended. The only religion he understood was a body against his. The scriptures would be spoken, said, or even kissed upon a darned soul over and over again. Upon the seventh day, he knew, as he’d witnessed and become part of events, where he truly failed to rest upon that day. No rest, as there would be no assured circumstance for the wicked.

He closed his eyes, looking down towards the wooden floor, realising that he didn’t forgive any of them.  None of them. He’d been the sinner, the recriminator of sorts, throwing asunder the failings of others with the finger pointing of failure. Although he wasn’t perfect, the ideal specimen of frail perfection, he knew exactly what he presented. He had his sins and he enjoyed his visits to hell and back. For a hundred days and upon a thousand nights, he’d feast his lips upon the skin of another without hesitation or remorse. For that, he was called a predator, the freak, the weird one amongst the shadows of plain sight.

Mistaken, miss-understood, the ways of a person placed beside the idiotic nature of how to act and be. It was all a great, big, fundamental mess of burning moments. He needed to speak, to quench his very inquisitive nature upon another’s soul. He needed no answers, as he knew the correct method of traversal. He knew of no knowledge that could repent the actions of life. Satan himself, when called upon, when risen within his bones and body, would sanction such a person to live upon the mortals of debauchery and repugnant notions.

Daniel smiled, his eyes still closed, as he replied, “Oh Father, you have no idea! Let me tell you… everything.”

The storm within him had showered his very nature for many, many years and as his eyes turned to a blood red shade of fear and agony, he knew that it was time, the time, to go to Church.