Daniel looked out of the car window, imagining, thinking, finding any possible reason to escape the boredom. His young mind usually found something elaborate, an alien invasion, a chase, an escaped rhino or, even, just the thought of flying. That imagination of his, remaining vibrant, still free and not yet under the grip of online gaming. He looked up to the sky as raindrops started to fall. Rain. 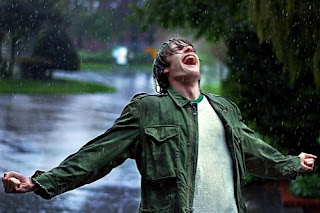 He smiled as each new drop hit the side of the car’s window. He immediately wanted to join them together with a pen or pencil. Join the dots, within a real-life scenario. Instead, seeing as he’d probably get into trouble, he decided to press his tongue against the window.

“Dan, please don’t lick the window!” exclaimed his Mother, knowing exactly what Daniel was doing from the corner of her eye.

“Sorry Mum,” he replied, “I’m just seeing how cold the rain is!”

She shook her head, her eyes buried deep into the latest parts store catalogue. The single Mother, the one that did it all, despite whatever life threw her way. Stopping for a second, she lifted her head to see a well-known figure within the community. Mr. Franklin approached the car, walking or, should she say, dancing once again in the rain. She smiled, knowing exactly why he seemingly danced every single time it rained.

She glanced at Daniel who, obviously being an inquisitive soul, immediately noticed the dancing man and she knew that a question was incoming.

“Mum, why is that man dancing?”

She continued smiling, as she curled over a corner of the catalogue’s page and closed it. She knew that a young mind would easily understand what she was about to say, but words would have to be used sensibly to escape a further ten questions.

“You know when Mummy wants you to go to bed at eight, and you fidget, cringle, moan and complain?”

Daniel shook his head from side to side, playing the innocent role.

“When I do manage to get you into bed, you feel sad and just want to keep on playing!  Mr. Franklin is the kind of person to not make a fuss. If he was asked to go to bed early, he’d smile and rush to bed!”

“Why?” asked Daniel, a bit confused as to why someone would willingly do such a thing.

“Mr. Franklin knows that time spent fussing, fighting and complaining, is time thrown away. The sooner you get to bed, the sooner you can wake up and start playing again! Do you understand?”

“Yes. But why is he dancing in the rain?”

“That’s an easy question to answer. It’s easy to be happy when you’re playing, or the sun is shining, but the real challenge is dancing when you’re asked to do something that you don’t want to do, like going to bed early,  or when life is difficult or you feel sad! If you can dance and be happy even when everything isn’t perfect, then you can still enjoy life without the sunshine.”

Daniel nodded, his inquisitive little face more or less understanding why the man danced in the rain.

“Does that mean I can dance in the rain as well?”

His Mother shook her head, “No, not right now, but maybe when you’re older!”