Deaglan, still playing with his hands, nervous energy evident in all of his actions, waited for the quick nod. It had been, probably, over 4 years since his last confession. Since that time he’d experienced a lot, changed job a few times, met a lot of new people, seen small parts of the world but still yearned for his Irish roots. Settling back into his home life he’d managed to establish something worth living for but, no matter what he’d seen, done, or planned to do, he still knew that there were important things to in life. 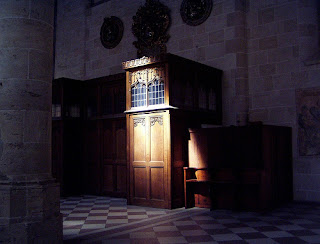 He heard the knock and opened the confessional booth door. The cold dark wood, probably older than him, creaked ever so slightly as the small room welcomed him. Sitting on his hands, still nervous, he said the words that he hadn't heard for the longest time, while making the sign of the cross, “Forgive me Father, for I have sinned. It has been four years since my last confession!”  Deaglan felt the shame but, with the way of things, that shame wasn't as strong as it used to be. He knew that times had changed, but no matter what, he believed and that was all that counted. He heard Father Patrick clear his throat before speaking, “Tell me Son, tell me your thoughts!”

Deaglan, not one to gossip, or to follow the general thinking of today, decided to be honest despite his thoughts torturing him. If he’d told friends, or colleagues, he knew that he would be laughed at so now was the time, the place, to be brave and honest. “Father,” he paused, selecting his words carefully, “There is a woman that I like.”  He could see Father Patrick move ever so slightly, which didn't calm his nerves.

“Tell me Son,” Father Patrick asked, “what is troubling you? It is perfectly fine for such things.”
Deaglan looked down, taking in the view of the carpet, quickly snapping back to his thoughts,
“It’s just that she’s been chasing me Father. My thoughts are not as pure as they should be.”  As the words moved from his lips, with each second, a small weight lifted from his mind. He didn't follow the normal convention of things, trying to stay as pure a possible which, in today’s age, seemed to be getting harder and harder.

A few seconds arrived and left as Father Patrick mused the situation. Eventually, slowly, he moved closer to ensure that Deaglan heard his words, “Son… Do you think that Adam, as well as Eve, committed a sin by being with each other?  It is okay for a woman to chase a man, as much as it is acceptable for a man to court a woman. There is no venial or mortal sin, even when we are in our natural naked state.  It is normal. It is natural.”  Deaglan, floored by the answer, could barely find any words to reply but, due to his silence, Father Patrick continued, “Eve did not tempt Adam with her body, not once, as we desire, as beings of love and passion, it was by an outside snake that she unwittingly eat the forbidden fruit and, in doing so, offered the sin to Adam.”

As Deaglan relaxed that little bit more he asked the serious question that had been playing on his mind, “Should I ask her out for a meal Father?”
“Of course you should Son, as soon as possible. I gather that your intentions are just?”
“They are Father, they are, despite her words being on the rude side!”
Father Patrick laughed, “Son, words are words. Intentions lead to actions and if you become man and wife, the words will all be worthwhile. Embrace the chance you have. Now, do you have anything else you would like to say?” Deaglan shook his head before confirming that he didn’t.
“Give thanks to the Lord for He is good,” said Father Patrick to which Deaglan replied,
“For His mercy endures forever!”

Deaglan stood and exited the booth, knowing that he’d say penance as soon as he could. He couldn't believe the reply, wondering what he would now do. Walking from the Church, onto the path outside, he looked at his phone, opening the chat application, to which he started writing a text that made his intentions clear. He had a pure heart, a good heart, a heart that always made his Mother proud and he intended to keep it.

As the message flew into the world of electronic communication, he smiled, finally knowing that his growing feelings weren’t something to be ashamed of. Sometimes, at least on this very day, confessing his supposed sin cleared the way to a new world. Looking back, towards the church, a bigger smile appeared across his lips and he knew that today, his confessional day, was truly a day of days.