Exhaling hard, lungs on fire, she stopped and closed her eyes. Trying to regulate the breathing mess that she’d managed to get herself into, listening to her heart, beating, battering against her chest and thoughts. She knew that it wasn't going to be easy but, many things worth doing, never were. 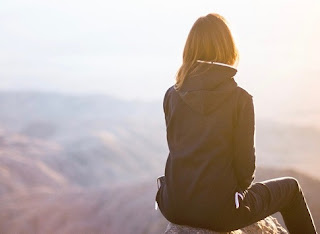 Opening her eyes, looking upwards, she embraced the view in front of her. The mountain, that mountain, that she’d wanted to climb for the longest time had finally knocked on her door and invited her to roam. She’d accepted the challenge, risen from her daily mundane life and taken that day off. For once, just this once, she’d decided to fall away from the routine of things.

With each step her body asked her to turn, to slowly descend back to the bottom, but that wasn't going to happen. Other than her body feeling agitated, she wasn't in any danger, so she scorned her mind and told herself to shut up. It was, after all, only a mountain and the path were laid out directly in front of her. Sure, the twists and turns were there, with many plainly in view, but it wasn't anything that difficult.

Images roamed into her thoughts as she advanced, of her state of mind, her current situation, as well as a few distant choice moments that she’d wished not to be reminded of. But this was her mind, her life, hardly a mess, but a jumble of ideals, thoughts and inner fights. She knew that she had confidence issues, those nagging doubts that seemingly pushed at her heart strings. She was an expert at self defeat, but not all the time, just in the occasional circumstances that mattered.

Her earlier life seemed to be full of moments, those moments, where you just wanted to run away and hide. Sure, of course, she smiled a little as she remembered that she’d actually achieved far more than she’d failed at, yet her mind did seek any opportunity to interject choice words of negative fate. She could do this, yet because of that, she didn't place that foot forward. Shame, a tragic affair, but the same for many, many people and moments.

Nearing the top, or at least the top that she could see, she’d managed to get her breathing under control, that second breath of energy. Sometimes, she reminded herself, stopping didn't mean failing. It simply meant that she was stopping to catch a breath, to strategise, or to simply scream into the face that looked at her in the mirror. This was life, this was her life, so she, above all, controlled every single little aspect.

She knew that she’d been facing a small inner crisis, for the shortest time, or was it the longest time? She didn't know, probably didn't care at this point, due to the new climbing boots biting into her ankles. The pain, sure to follow, wouldn't matter as she was a woman and women knew pain all too well. Mental, physical, with her soul sometimes cracking in the process.

She took one mighty step forward and reached the top of the mountain, looking into the valley ahead of her, smiling as she sat down on the cold concrete bench. Hardly a challenge to be proud of, as she’d been here a few times before, but this visit being for something different. Brushing her hair aside, bundling it into a hair clip, she embraced the situation and stood. Proud, full of energy, wishing for someone, somewhere to hear her and, most of all, to hear herself. She clenched her fists and screamed at the top of her voice. Every single bit of energy, she had left, she let loose as she fell to her knees. Her adrenaline spiked, her face started to turn red, as she continued to scream.

A tear appeared, followed by a few more, as she stopped screaming. The echo. She heard her own scream, a few times, until it vanished. Although she felt a bit embarrassed, with just the thought of saying such things, she shouted out the words that appeared in her mind, “I believe in you,” pausing to hear her own voice echoing, smiling as she heard her own voice tell her what she needed to hear, “I believe that you’re worthwhile. I'm here for you!”

Many words, many echoes, were spoken. Returning to the seat she felt a small weight lift from her mind. So many people, so many times, everyone told her, informed her, that she was worthwhile, that she could accomplish anything she set her mind and heart to. It didn't matter. The damage, the years of damage, had been done. So many words of negativity, so many moments that made her heart crack into small pieces where, finally, she had to hear her say the very words that she wanted to believe. Within her, her mind, but most of all her heart, hearing herself finally admit that she could lift her tired arms, that she could truly put her heart into any adventure, made that small bit of difference to her.

For far too long she’d heard the echoes of past lovers, past failures, past demons, that hearing the echo of positivity was something that she had to do for herself. Standing once again, drying her eyes, she nodded at the valley, expressing thanks, then turned to walk back down the mountain.