Frank smiled, then nodded, as the family left the subway train. He liked a chat, a chance to smile, as he’d enjoyed life so far. Of course, as was sometimes the case, he didn't wish to intrude but the life of an 84-year-old pensioner wasn't that exciting any more. The same day, each day, the morning subway journey for food and maybe, just maybe, he’d bump into friends. 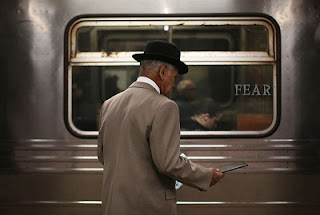 It was a Tuesday. A solitary Tuesday within his week. He liked Tuesday, for no apparent reason, other than it was another day that life allowed him to remain in this place. He had family, a few remaining friends, who seemed to have drifted further away with the distance increasing. The warmth, however, remained. He was a good man, so they said, as he dare not assume anything other than to be down to earth. Frank closed his eyes, for a second, smelling the pie that someone had brought onto the train. It smelled like heaven, a meaty heaven, which quickly meant that he’d soon have the same food. It was always a choice between the shopping mall’s food compendium. Chicken, salad, beef burgers or, possibly, a hot dog from the van outside. Choices. Everything a choice.

The subway train stopped again, with only three more stops to go, as a whole new selection of people arrived onto the train. Opening his eyes as the doors shut, he glanced along the train’s interior welcoming the new faces with his ever-present smile. He loved this, all of this, the people watching, the new hairstyles, the crazy clothes and more. He could spot distress within the calmest of faces. He’d seen so many tears, usually as the youngster’s face pressed their eyeballs to their phones, which was the latest trend that didn't seem to be going anywhere. People and their phones. Constantly avoiding other people without even knowing the causality of their actions.

Frank watched as three youngsters walked towards where he was sitting and, with ease, jump onto the seats around him. He smiled and nodded at the supposed main character of the bunch, who’s hair seemed to have a life of its own. He was chewing gum with his mouth open, with a look of mischievousness about him, obviously making a statement wherever he went. The other two, slightly younger, following his lead.

Frank looked out of the window, noticing the main boy gathering the attention of the other two and, as expected, the boy leaned forward, “Hey, old man, that’s my seat you’re in?”  Frank would laugh but he knew that would intimidate the boy. He’d lived a long time, had his arguments, his fights, even punched a few people, but he’d remain calm as he was in no real position to argue. Facts, to Frank, usually worked. Leaning forward to within a few inches of the boy, Frank calmly spoke in a clear and precise fashion,

“My boy, I've been travelling on this train for over 12 years, each and every single day. This is the first time I've seen you!”

The boy smiled, looking to the others for some type or moral support or confirmation, as Frank rested back onto his seat. The boy, obviously not expecting the reply, repeated his statement, “Old man, that’s my seat!” Frank, shaking his head, placed his hands together, finger to finger, palm to palm, then, lowering his head slightly, started to say a phrase just under his breath. The boy, confused, didn't quite know what to say, “I can’t hear you, old man?”

Frank continued to repeat the phrase, each time increasing the volume slightly, calling upon something that he’d not touched for many a year. In his day to day life, many years previous, he was a priest, a self-sacrificing priest, until he’d found a very old, dusty book. He’d read that book, cover to cover, over and over again. It destroyed his faith. It removed his ability to try and dissolve other’s pain and fear. It meant that he’d turned his faith into a new life. The book explained emotions, the path of how to feel, how not to feel, as well as channel aggression and hatred into a new form of energy. He knew that everything, as well as everyone, were connected but he also knew that each person had the chance to become judge, jury and executioner of their own lives.

‘Free will’, was how he summarised the book. Free will removed the need for gods and deities, the reasoning behind so many things, falling into an abyss. His life changed, his entire view of things evolved, every moment of his life becoming clearer. Cause and effect, everything happening for a reason, the usual placid statements repeated by so many people, becoming real. Everything connected.

Frank repeated the chant, again and again, much to the boy’s frustration. Finally, the words could be heard, “Leave us alone!” repeated Frank. Over and over. As the moments moved, the boys watched as the other train passengers stood, all chanting the same sentence. The same words. The boy pressed himself into his seat, moving closer to the side of the interior. The boys felt fear rise within them, wanted to hide, as all the passengers appeared next to the four of them. All chanting.

Frank’s voice started to fade as the other passengers turned to walk back to their seats, the words returning to a whisper, then a murmur, finally ending as he closed his mouth. Placing his hands to either side of his legs he smiled at the boy, “Would you like this seat?” The boy, shaking his head, the look of fear across his face, pushed his friend out of his seat as the three of them quickly walked away from Frank.

He knew, Frank damn well knew, that no bully, no matter how fierce or strong, or even stupid or away with the fairies, could stand up to the ‘force of many’. Strong in numbers, together, removing the fear of the single man. All it needed was someone, anyone, to simply make a stand. Frank returned to looking out of the window.

Today was going to be a good day. A fun day. With possibly a pie of some description. This, the simple things in life, made Frank happy.