Tenderly, carefully, she placed her hand against the side of his face. She could feel the anger, the boiling rage within him, bellowing forward into the world in front of the both of them. He was rage, he was powerful, bestowed with the strength beyond her understanding. Her calming touch, slowly, drew his eyes to hers. She could feel his heartbeat, as her other hand held his chest. He was hers and she was his. Bonded. Fated. The cause of their effect together. 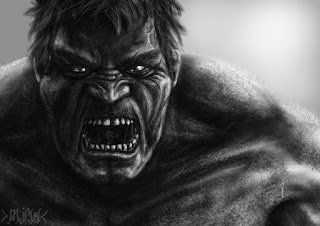 His eyes, full of hatred, the raw emotion embracing his every thought and action. He knew that he couldn't hold such feeling when she looked at him that way. The caring way. The loving way. She broke through all of his defences, all of his actions becoming nothing next to her smile. He fell to his knee, his face in front of hers, deeply embracing her smile within his heart and mind. She’d found him, sprawling, roaming, lost within the world and life. When no other would even contemplate being beside him, being as close as she’d become, she held his hand, embraced his lips upon her, she’d taken his body and made it hers, while whispering thoughts that truly changed his life.

She couldn't, however, erase the years of rage and destruction within his very blood. Discarded, forgotten, left to rot and fester, he’d nearly lost himself within the war of his feelings. He would be nothing without her, maybe she would be nothing without him, but he doubted that to his very core. She was so beautiful, with every word from her lips sounding like the sweetest song imaginable. The words, the moments, soothed him, bathed him with the luxury of someone caring for his very life. He knew that he was blessed, held, truly embraced by the beauty in front of him, despite being the beast of a man that he was.

She knew that she’d never erase the rage, the unfathomable destruction laid virulent within him, as it needed to be used. She smiled, touching the various scars upon his face, with her soft fingertips. He had been broken, crafted, re-defined as a destructive force, yet hidden from the world and then rejected. He knew how to destroy, to fight, yet she’d taught him how to love, to touch, to obey her bodies every command when making the love they both needed. She was, to him, so pure yet her light, her inner light, needed the strength of his frame beside her. Around her, within her, embracing her every desire. She loved him for that, adored him, realising that the balance between them worked beyond compare.

He saw her, bathed in her, as his fingers found hers while holding her hand. His arm moved around her as he lifted her from the ground. He turned, walked towards the building behind the both of them, partly destroyed, their home once again found by the aggressors of their simple life. The jealously, the apparent rage, from nowhere by people that should simply leave them alone. They led a simple life, of privacy, of grace, despite his lumbering strength. Jealously. The inability to accept that two people could simply exist together, to be happy, disturbed so many people. Those people, their own unhappiness defining them, tainting them, tempting them to cause such destruction yet blaming the accused for everything.

She knew that he had to do what he was about to do. It was inevitable. No amount of understanding, the many words that could be used, would pacify another’s heart that simply wanted destruction. They could be left alone. They caused no disruption. They caused no ill will. So be it. He placed her onto the stone wall, holding her lips to his. She felt like heaven. She was, to him, such a place made real within the world. His heaven. His reality the thing of beauty.

She felt his soft kiss, his apparent power falling to the softest touch she’d ever felt. He made her feel safe, wanted, needed, desired beyond belief and, most of all, empowered her to be everything she knew she could be. She could find this place without him but that, that thought, didn't bear thinking of. She’d never wish to be without him. She’d feel empty, alone, the world becoming but a shadow of itself without him. Her skin would feel cold, her lips vacant, her smile lost, as the cold nights mingled together. She nodded as he, again, intensely looked into her eyes. It was time.

Stepping back, he allowed the rage to flow through him. Become him. Every fibre of his being feeling the strength within his very heart. They’d attacked again. They wouldn't leave either of them alone. It was time to teach them, to make them understand through blood, pain and agony. She had tried all of the other ways to teach, but now it was his path. Turning, his body becoming the monster he didn't wish to be, he started to run towards the small army ahead of him.

She watched as he ran. The rage flowing through the air. She wished for another way, a better way, but the monster within the both of them, at times, simply had to feel the rage.