She crossed her legs, becoming comfortable whilst sitting outside the French riviera. Calm, finding the place where she relaxed her body, as well as trying to relax that mind of hers. The thoughts, invading her, enveloping, consistently trying to find a weakness to exploit. That type of thinking didn’t matter to her, not anymore. She’d found a release, a sin of sins to explore. It kept her up at night, at times, while also keeping her thoughts constantly filled. He, him, that person sitting across from her busy reading the local paper, made her needed sins reality. 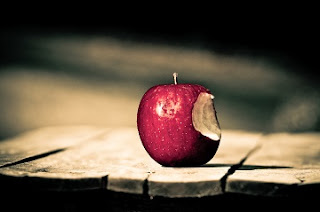 Excitement, his smile encompassing the very word, the very notion of being completely, utterly and absolutely devoured in every single way. Yet, at no point, would she ever deny any of the moments they’d shared. He’d appeared from nowhere which, to her, baffled her structured, whilst cluttered way of thinking and living. She fought herself, at times, finding any source of shallow negativity to cling to, to embrace, yet the sins upon her skin had spoken a legion of words within.

He was all of her sins, made manifest, from all of the nights, those lonely curled up and cold nights. All of the sins she needed to commit with someone, all of the times she desired someone to be within her, wrapped around her, having her, taking her, freeing her from the everyday boredom of life, drama and idiocy; made real.

She just wanted to feel that sin. She wanted to feel so alive, like she could let go, lower her guard, let someone in to do whatever they wanted to do. If, the next day, they were still beside her. As long as there was that little bit more, she didn’t care what sin was performed upon her body. If they wanted that little bit more, listened to her, held her hand, walked beside her, she didn’t care what happened in private. She was open, freely willing to do every… single… little… thing.

She didn’t mind the bruises, on her arms, or legs, as that was what he was. A whirlwind, a cacophony of absolute lust, desire and need. Again, that did not bother her, as whilst he was being a whirlwind, she was simply being swept away with the moment and then, from nowhere, he would calm. He would be so sensitive, touching her like she’d never been touched before, holding her in such a way that ensured she felt cared for, loved and more than desired.  Then, he would rise again, to literally envelop and encompass every single part of her.

He was a man, she was a woman, and he did not mean to hurt her, at all, but his fuelled moments made her shake, feel, her need sending butterflies to her stomach. She was wanted. He wanted to hold her and never let go, when he reached that point. He didn’t want to stop, never stop, and she didn’t wish for him to stop. Besides, she’d given him a few bruises, whilst on top, feeling, expressing, also not willing to let go of the moment. She even, once, nearly broke one of his fingers. Even though the pain echoed through the room, in that moment, neither stopped, neither giving in to the pain, because when it’s that intense, she simply did not wish to cease the moment.

His sin became hers. She knew that he’d had a colourful life, filled with pleasure and that pain spilling from within him at random moments, but that made his mystery seem all the more sensual. Each word, from his lips, called to her, especially when he whispered his sinful words at the most inappropriate times. He just knew everything about her. Reading each look upon her face, knowing exactly what she wanted, when she wanted. He seemed to have a sixth sinful sense that drove her crazy. She’d never known anyone to use their lips, the way he did.  Vocally, seductively, emotionally and provocatively. His damn sin, being spoken and written upon her delicate skin, as her cheeks felt flush with her rampaging thoughts.

He looked up, from the newspaper, with those dark eyes of his. Her body, her gloriously worshipped body, felt his eyes upon her as she witnessed his sin wash over her. She would never, ever, have this any other way. She would sin all day, all night, repeating that sin until she could hardly breath, as a world without sin, would literally be a sin made real.