Each step, each lumberingly laborious step, loomed ahead of her within the spiral. It had been a few months, weeks, with moments of joy filling her life in a way she thought she’d never experience. She’d smile. She truly would, if it weren’t for the damn stairs ahead of her. Sure, yes, of course, it was keeping her fit and lively, but that wasn’t the point. If there were a lift, she’d take that instead. 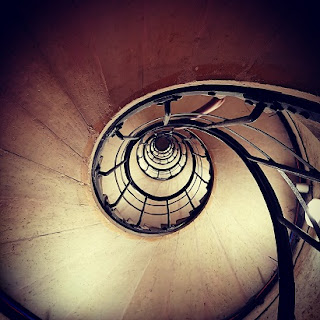 At times, on a good day, a very, very good day, she’d jog up the stairs but today was not one of those days. It was one of ‘those’ days. The weight of the world arrived, to her mind, the moment she had opened her burdened eyes. Nothing in particular weighted her thoughts, just the usual, the ever so often notion that staying within the soft sheets and escaping life would be easier. Facing life. Embracing life. Realising that things could be amazing, could be effortless. If only; if that ‘only’ moment roused her thoughts into believing. Anxious, heavy, wooden thoughts betraying her. She just didn’t want to move.

The basis of all things, her ever present thought, of simply not being good enough. Her alarm had spoken to her, after the third snooze, reminding her that there actually was a place that needed her. Wanted her. Called to her through all of the doubt and upturned smiles. He wasn’t a rescue, nobody would be, but for the briefest time she actually smiled, forgetting the thoughts, flying without the constant need and reminder of becoming grounded. It was beauty itself, the grace to which she inspired, to see her own face glow with a glorious smile. For that moment.

Each step, higher than the last, each step a push forward. She stopped, placing her hand upon the rail to her side, puffing air from her lungs as she grasped at her breathing. That momentary lapse in effort as she allowed her body to catch up and recover. It was early, far, far too early, but she had been given the suggestion and accepted in a moment of madness. No make-up, scruffs, just herself, her torturing thoughts and not much else. This is what he had asked for and, against ever single screaming thought within her mind, this would be what he would get.

The questions and taunts appeared within her mind, as she continued up the spiral. She’d found herself, figuratively, metaphorically and emotionally, at the bottom of many spirals. She’d climb from them, reach up from the bottom of whatever moment she found herself within, many, many times and would continue to do so. Through great fear, or so she’d read, could rise the most impressive willpower imaginable. Facing her own fears, her own thoughts each and every single day, meant that she could barely run, let alone hide, from each and every single one of them.

She wasn’t good enough, wouldn’t and couldn’t accomplish this, or maybe that, despite doing so against all of her odds. She’d see people flying so very, very high, despite having to be grounded and attached to her breathing patterns at all times. The momentary flairs, where she’d simply wished to run and escape, haunted her and pushed her to the ground. She denied it all, of course, as the desire to function the same as the people standing beside her, overruled the great big monster within the room of her mind. Haunted, exasperated, the darkness still calling for her at every single turn.

Another step, another moment closer to the door that held so much for her. She’d push him away, if it were not for the way she felt about him. She, again, reminded herself that he was not her rescue, a saviour of sorts, but a safe haven to relax and let her inner self express. The thoughts seemed to dissolve when he held her hand. He, as much as he said he did, seemed to marginally understand. He wasn’t the type to just say that he did, as he was not living within her thoughts, experiencing them, pushing them away when even picking an outfit filled her full of dread.

The last step, the spiral behind her for another day, gone and thankfully forgotten. She stood in front of the door, that fabulous door, the door that allowed her freedom of thought and expression. No judgement, no repercussions, only the odd look when he seemed to know what she was thinking. He had taught her one thing, amongst others, that her first thought or decision to a question would usually be the correct answer. All that followed was doubt, questioning, denial, fruitless and best avoided. The slow thinking versus the fast thinking of life. That thought, after realising that everyone did the same thing, opened her eyes a little. She’d denied her thoughts as much as possible. Her first decision, to any question, would be her guide and that’s why, right now, she was standing in front of his door looking like a hedge had managed to prepare her hair, face and clothes for the day.

She gently knocked on the door, her usual way of saying hello despite standing outside many a door for longer than necessary. She did not like loud noises and, due to this, she also didn’t wish to create them. The door opened, as it had done many times previous, as her view was filled with his smile. Those eyes of his, seemed to do something to her, in a way that she didn’t wish to ever change. They saw her, really, really looked into her while so many, many people looked through her. For once, that glimmer of hope residing within, that spark alight, she actually believed that he wanted to be with her.

“Hello,” he said with his usual warm voice, “Come in, everything’s ready!”

She smiled, stepping forward, not having any idea of what was about to happen. The apartment was beautiful, the décor quaint yet stylish, lived in and arranged for relaxation. Whenever she walked into the room the feeling of calm flowed over, which was a stark contrast to the icy feeling of her apartment.

“How are you?” he asked with that damn smile still upon his face.

“I’m fine!” she replied, knowing that she wasn’t fine, as her thought bounced around within her mind. She looked terrible, her hair wasn’t arranged as she’d like, her clothes a mess, her mood swinging from happy, to scared, to running away after throwing his potted plant through the window. She was, if she were honest with herself, a complete mess of contradictions. She felt her hands start to shake, as her thoughts simply destroyed any beauty that was within her reach.

He stepped forward, holding her hand, as his other hand moved around to her back as it pressed her against him. “I know that you’re not fine, which is perfectly fine, as you’ve arrived here as instructed, yet you still look amazing!”

She laughed. She didn’t look amazing, yet he seemed to see through all of that and insist that she was. The darkness, surrounding her, made her own smile escape her lips.

“Hey,” he said knowing exactly what was happening, “No words!”

She looked up into his eyes, wondering what was happening, as he kissed her. Slowly, very slowly, as he removed her jacket and started to unbutton her blouse. She looked at him as the kiss ended, her body racing, her heart becoming alive within the moment. The blouse fell to the floor, as he bent down, removing her shoes and socks. Returning to her view, looking deeply into her eyes, with that damn smile of his still doing what it did, he unbuckled her belt, undid the buttons on her jeans and slowly, with a little bit of effort, jostled them away from her. Stepping away from her clothes, he reached around and separated the clasps of  her bra with one hand and then, just then, removed the last remaining garment.

Naked. Completely naked, standing in his room, her mind suddenly vacant of thought as her breath explained the warmth escaping from her body. From only just managing to escape her bed, the grounding of her thoughts becoming her only concern, to dragging herself here, for this moment and notion. It all seemed a bizarre and crazy series of events. Her belief in herself, something of an enigma, yet she could stand here, in front of this man, completely naked and vulnerable. None of it made sense, with all of it real and so very, very beautiful.

In one swift moment he cradled her within his arms, her legs over his right arm and her back held with his left. He carried her, across the room, towards the pre-prepared bath. Slowly, gently, he lowered her in. The bubbles, surrounding her, the aroma of freshness embracing her, as she just kept her eyes upon his. She watched as he removed his dressing gown, his taut figure greeting her as she gloriously viewed everything he had to offer. She’d laugh, or even giggle, instead choosing to keep her delight a secret. For now.

Stepping into the bath, lowering himself, their legs finding their place, he motioned for her to turn around to rest upon his chest. She turned, feeling his arms wrap themselves around her, holding her, greeting her in the way that they should always greet.

“If you’re feeling brave, tell me everything about the spirals that you face, each and every single day!”

She smiled, knowing, realising, that this was a safe place, would always be a safe place, with a person that understood. He realised that some struggled with the smallest things, the moments of life, the words that needed to be found.  But no matter what she thought, irregardless of the struggles, no matter how she managed to stay grounded, she’d gladly fall into a spiral as wonderful as this moment.