The chain, dangling as it did, nearly reached the floor. Heavy, thoroughly constructed to hold more than the current weight, as the small sized wrecking ball dragged along the ground. This item, the implement of a mind in turmoil, would be used for one specific task and one task only. Destruction, devastation, destroying anything that managed to get within the chain’s thrown distance. 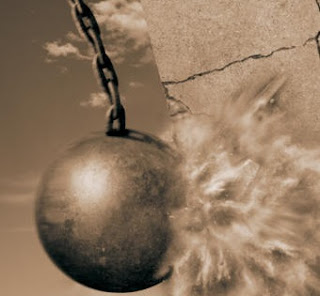 He dragged the ball, effortlessly, behind him, with a certain length of chain wrapped around his arm. His arms alone, if needed, could strangle a man to death with ease and yet, he still chose this item above all others. He neared the house that he once called home, that majestic place that held him within the warmth of his lover’s embrace, all those years previous. His heart started to pound, as his sight caught hold of his destination. He loved this place, adored the moments, yet needed to do this for his very sanity.

The entire world, gone to hell, yet his one thought remained here. There was no sanctuary, no solace or serene embraces left alive for him to hold onto. The world had seen fit to remove them all, one by one, despite his vivid demonstrations and efforts to hold them close. He’d heard all of the words, explored them, with his sanity starting to edge away from him as the months vanished. He was once sane, understanding, yet the world simply wished for him to change. Violence, the vulgarity of the male nature, finally releasing itself to the moment. He’d had enough. He’d heard and witnessed enough.

He'd known no words, of slander or pain, until the torture they’d chosen to throw his way. He tried to help, to assist, to understand, yet the others only wished to inflict drama and pain. No more. No less. This was his moment to finally let go of his bonds upon this frightening world. He would destroy, he would relinquish the bonds that restrained the animal within. Today, upon this day of days, he would be all he was meant to be. An animal. The majestic tolerances, finally erased and evaporated, by the saline words rubbed into the open wounds surrounding his heart.

The house, upon him, was now in front of his very eyes. He glanced at the windows, with the glass strewn across the ground. Broken, discarded, each shard reminding him of each chance to help and never hinder, thrown away as if it were nothing. He had protected himself but, unfortunately, it was often far, far too late. The moment, gone, the damage, done, with hope rising after the very understanding burned itself into his subconscious. He was, for no better word be found, knowingly broken. After all of the effort to resolve, to fix, he’d felt the cracks start to form and his energy wane. Sick, tired, no longer wishing to share his thoughts, he’d turned to the physical strength of life, instead of the mental. He would break and he would suffer, but by the very grace of his fists, he would survive and no longer be thrown aside.

He grasped the chain, his mighty arms flexing, the tight motion moving as he lifted the thick iron ball with its chain. With one small motion the ball flew into the air, spinning around and around above his head until, when ready, he directed the swing towards the house in front of him. The chain moved through his fingertips, allowing the ball to travel further from his frame. With a smash, it struck the house. Shards flew, the side of a window frame snapped, and a small hole appeared.

Slowly, with focused force, he pulled the chain until the ball returned to his side. Again. Once more. Over and over again, he threw the ball towards the house, until a human sized hole appeared along the brickwork. From his side pocket, he produced a small amount of explosive charge. After this day, he knew, that he would never be haunted by the years of words and moments. He would finally, easily, walk away from the mess and torrid disturbed lashings.

The timer set, he threw the item into the house and turned to walk away. For a second, he hesitated, turning his head back towards the house. The moments. The experiences. He smiled, despite his mind being the way it was, as he knew that there would always be moments other than pain. His head lowered, as his eyes removed their focus from the house. His tortured mind, wishing to think, to return to solace and understanding, pushed his idiotic heart aside as he continued to walk away.

There would be no return to this time. What once was, would never be again. He accepted that. Would have once nurtured the moments, if it were not for society’s way of blaming everyone for anything and everything. This was why he was here. This was the very reason for his way of thinking, if he’d call this moment thinking. The house, behind him, exploded into more pieces than he could ever count and, at that very moment, that second, the wrecking ball metaphorically released him from the very chains that had held him in place for the longest, most torturous time. He was, finally, free.