Placing the lipstick against her ever so slightly raw lips, she pressed and moved its delicate shade. Slowly, surely, with the skill of a thousand impressions made upon the softest tarpaulin, she finished inscribing the colour. Done. Over with. Finished for the day. 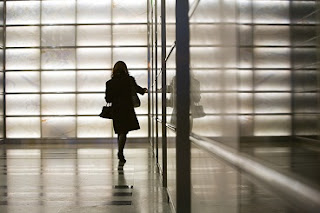 She stepped from the bathroom, picking up her skirt that was thrown across the hallway in that moment of rushing, beating, heated foreplay. Looking quickly to her right, she caught sight of him, lying there, on top of the covers. She adored his body, that cheeky round backside of his, as well as the rest of him. She smiled, nestling herself into the skirt. The blouse, clean, white, hanging from the doorknob, waited for her attention as she reached behind. The bra snapped together, as she jostled her cleavage into place. Nearly done, slowly moving forward, as she stood in the doorway collecting her blouse.

Once again, with wide eyed wonder, she looked across his body as the blouse flowed over her. Each button, receiving individual attention, in order to not look at them again. Flicking back her hair, removing any strands from under the blouse, she continued to work her hands through her hair as the seconds moved.

She walked into the room, bending over, to kiss his cheek. He lifted himself, ever so slightly, as his lips found hers. She kissed him, holding his lips against hers for an extra few seconds, ensuring that he understood that he meant more to her than he, ideally, should. He pressed his lips to hers, his pleasure and smile being felt by the fleeting emotional moment.

Moving away, she whispered to his ear, words of returning and for him to be okay. She turned, to walk from the room. Done. Over. Gone. For now. The moment sedated for another few days. A few moments later his door shut, as she walked towards her car. Her friends, her beautiful friends, did not agree with the way she lived her life. The thoughts and their words resounded within her mind, as she reminded herself of how unhappy they were. Settling for less, for the moment of a lifetime’s similarity, the fire long gone from within each of them.

She’d been taught to deny her requirements, to obey, to fit in, to elude the trappings of having what she wanted. She’d tried the standard life, the usual method of living, which simply did not work for her. The family, the kids, the defined and refined statutory way of existing. She’d had the children, desired the partner, but realistically realised that finding such a person would take time, patience and annoyance.

Opening the car door, she hesitated, looking back towards the house. He was, possibly, good for her. He knew which buttons to press, physically, including the words to use when required, with his body fitting hers as if they were meant for more. She shook her head, pushing away the notion of leading a normal life. She’d been there, done more of that that she’d liked or allowed, with her own destiny being firmly under control.

They’d said that he was onto a good thing, getting the best of her time, seeing all of the smiles, the laughter and, of course, having her body upon him in the most illustrious ways. Her friends seemed to be unhappy for her, despite her smile growing after each visit. She felt alive. She felt her heart burning within her chest, the type of burning that didn’t include anguish, disappointment, worthlessness or anger. They’d said, over and over again, that he was using her, taking her for his own seductive needs.

As the car started, the engine purring to life, she closed her eyes as the thoughts of the last few hours flowed over her imagination. They simply didn’t understand, her friends and family, as she knew with every fibre of her core, that she wasn’t the one being used.