The atmosphere, the fog within his mind, exclaimed the singular desire to be seen, noticed and held. Daniel, sat next to the slightly open window, looked across the beautifully scenic lake as an actual fog spread itself in front of his view. He was, finally, at peace. 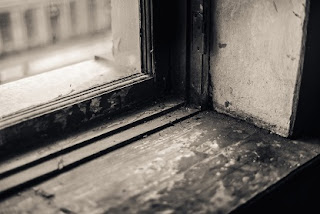 He ran his fingers along the windowpane, the paint upon the wood flaking slightly, as the age failed to hide the neglected attention and detail. He loved this place, moments such as this. He adored them and held them close to him. He needed next to nothing within his small, comfortable, flexible world and it showed.

Across from him sat the power tools, his intentions clear, with this new home becoming his future life and residence. He’d clean, he’d bring this place to where he’d relax, thankful to his very body and mind for doing what they did. He smiled, closing his eyes, as he heard the car engine outside. She was here.

He felt his heart suddenly move within his chest, the increased beat, as he breathed in the clean fresh air. This place, far from the hustle and bustle, the life of grime and constant aggravation, would hopefully ensure that his time, their time, would last for as long as possible. The world cared not for the people that wished to make memories as, instead, it preferred to dilute, infect, combust and rip apart emotions with callous motions.

He no longer wished to fight amongst the daily turbulence. That nine to five. Those days that repeated again and again. This place, these moments, were his chance to escape the thought of his very soul being crushed, to eventually be replaced by a younger, eager, fresh faced version. He moved away from the window, happy, his emotions refined to a steady flow of pure silence.

The door opened, as he neared. She smiled, dropping her bag to her side, her smile filling the room with such light that absolutely every single inch became something new. Standing there, in front of her smile, he felt his entire world view constrain itself to this very second. The very moment. He wished for this place and it came true. The grind and punishment finally all worthwhile. She was, above all, the surprise that appeared from nowhere.

He stepped forward, his hand finding hers, as their fingers embraced. His other hand found itself against her lower back, pulling her close to him. “It’s cold out there!” he said, with his very smile filling his words with tender care. He’d missed her.

“Do you have any ideas that might warm me a little?”

Gently, with thought and actual emotion, he expressed the way he’d missed her with the smallest of kisses. He just wanted to look into her eyes, to express, to know what was going on within that mind of hers.

“I see that you’ve brought your man tools with you!” she stated, as she ever so slightly leaned to her side.

Daniel nodded, laughing a little, knowing that she really did not like his man tools in any description.

“You know me, I’m not one to leave things for long!”

She placed her hand against his chest, pushing him away from her, ever so slightly.

“Well then, you’d better get a load of this!”

His mouth opened slightly, as she removed her long coat. Normally, usually, she might be wearing something extra special underneath, but on this occasion, she meant business!

Daniel laughed hard, placing his hands onto his knees as he kept his balance. She was wearing an all in one boiler suit, as she produced rubber gloves from either pocket.

“When you stop laughing, I think that there’s work for the both of us!”

Within his earlier years, he’d wished to create a home with someone, a real place to become one, until two, or maybe even three. He’d failed, the years moving away from him as he blinked away the moments and memories. This was beautiful, amazing, enthralling and, although he knew that most would find the tasks boring, he would not. It wasn’t work. This, to him, was absolute bliss. Creating something new with someone that cared and wished to share was, overall, what people were meant to do. Memories. Moments. The creation of something new. Together.