She felt him, against her, his arm around her chest as his calm breath gently exhaled across her neck. She moved the collated sheets closer, embracing them, holding them, ensuring she retained the warmth that she’d so desperately needed. The ecstasy, the calm finding her and, seemingly informing her to never, ever, let go. 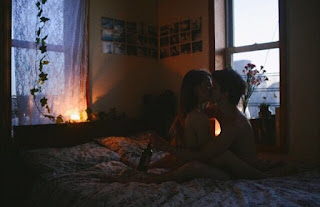 She was one of the strong ones, the type that held her life together as her last bastion of health, wealth and more. She’d survived, despite the efforts of others as well as some of her sick, twisted, defiantly ignorant ex partners. This place, these minutes, she wished and wanted to exist for forever and a day. She’d smile, if she needed to do so as, instead, her entire body, mind and possibly soul, glowed with the prospect of actually finding a person that complimented her.

She could hear him, feel him, the near silence hardly escaping the fact that he warmed her in each and every single way. She’d pinch herself to see if this were real but, instead, she’d happily make do with a dream made real. Simplicity, effortless, the calm within the world’s storm, surrounding her.

She’d turn, to utter words of faith, love, unity and whatever else she managed to find. Instead, she continued to simply bask within this safe place surrounding her. She wasn’t a fool, a person to grasp a fake request of trust, or to boldly throw herself into a moment of dishevelled embraces. This situation resolved a near lifetime of struggle. The ups, the downs, the ever-present desire to simply be understood and listened to. She asked for little, yet he, this person, asked for nothing but her time without the heavy notion of moving too fast.

For once, she believed. Him, the emotion, the words used, the faces made and the love to be played. He calmed her inner demon, that constant voice that asked her to dissolve any notions of grandeur. She didn’t need him as instead, she simply, enthusiastically, wanted him. A man, to her mind and heart, should never bring instability. She’d had enough of that within her daily world. The kids, the work, the chores and bores of the constant friend interjection. She simply, easily, just wanted someone to have her back and to bring the calm.

He said and did what he should say, with none of those silly little games that she herself played. She often missed the arguments, the ups and downs of those long-forgotten players, but this man behind her refused to play into such fantastical meanderings. He wasn’t with her to create chaos, instability, or the never-ending winding road of the usual written and scripted play. He was with her, to add his support to her life. She’d pinch him, push him, just to see if he were real, but instead she simply snuggled back that little bit further.

They were, firmly, finally after all of her time and energy, as well as failings and failures, entwined.