Poochie’s little paw moved over the door, the excitement growing, knowing what was about to happen. The great outdoors, the place of walks, freedom, random treats left on the floor by strangers and running. She loved all of those things. The beaches, the sunshine, the stroking and, most of all, even more running. 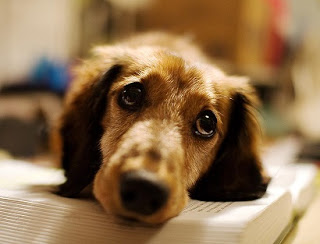 She loved being chased, but then turning to chase the chaser. Her soft, pink, long tongue fell from the side of her mouth, as the door finally opened. Bounding forward, legs in the air, her mighty strides ensured that she covered the entire front garden in the shortest time imaginable. She found a toy, another toy, a small ball and then something different to sniff. It was some type of mashed up paper, like the ones her owners looked through each day, but this was covered in some substance which smelled ever so good.

She started to lick the paper as her Mummy walked over, taking the paper from her, as her mouth gnashed. She panted, knowing that she at least managed to lick some of the snack juice. Once again, tasting freedom, she ran around the garden and, suddenly, realised that she needed to poop. Sniffing the ground, locating a suitable place, she waltzed around the same spot until her leg raised and the poop appeared. She looked around the garden, straining, knowing that it would shortly all be over and then there would be more fun to be had.

As her hind legs scratched away the horrendous smell, she trotted off towards the door to see what was happening. As she approached, she listened for any of the five words that she’d managed to understand. Mummy looked upset, as Poochie continued to listen, with her head slightly titled to the side. She heard the word stop, once, twice, then watched as Mummy started to cry. She’d never seen this before, in all of the weeks, days and months that she’d been here.

Poochie sat, not quite knowing what was going on, as her Daddy waved his arms around in the air, possibly as he didn’t really care. Then, as his arms stopped moving, he turned and walked towards the gate. She jumped up, following her Daddy, as this would now be the time to find all of those glorious snacks, to chase thrown stones on the beach, as well as sniff anything and everything.

“No, Poochie, stay. Stay!” said her Father. She once again sat, as her Daddy opened the gate and walked away. She didn’t understand as, instead, she simply stopped sitting to push her face through the gate’s view hole. She’d miss him, wherever he was going, but he would eventually come back. Turning her head to look back towards the door, she caught sight of Mummy sat on the small step, with water still moving from her eyes.

She turned, waltzing again back towards the door. Poochie was glad that she was not alone, as that was simply the worst. It was boring, especially as she’d been told off for chewing the side of the sofa, the wooden frames, the shoes, the telephone cable, the mobile phone, socks and anything else that smelt nice.

Poochie, feeling a sudden sadness overtake her, nuzzled her nose under Mother’s arm. She knew that something wasn’t right and, now that she was closer, Mother looked like she’d had her favourite ice-cream taken away from her, despite really, really, stretching as much as possible to get another lick from the container.

In one mighty movement, Poochie felt the floor zoom away as Mother lifted her from the garden. A second zoomed past her eyes as the door closed and the inside place appeared again. She didn’t mind being carried as it felt safe, protected, especially when the big slobbering dog from over the fence appeared. She didn’t like that dog, as it smelt of barbecue sauce and pigs ears.

Mother eventually sat onto the soft human bed, still holding her close. Poochie knew that something wasn’t quite right, so provided a few nose licks which, more often than not, helped get belly rubs.

Poochie could see Mother’s smile appear, as she felt her fur being stroked. This, to Poochie, was the absolute best thing ever. She loved her Mummy and, as she relaxed, she heard the words,

“If only humans were as innocent, loving and as beautiful as you!”

Poochie sneezed, sending snot and slobber everywhere, as her Mother continued to speak,