Daniel placed his hand onto the window, feeling, noticing the cold surface connecting him to something other than his own mind, body and soul. He felt the temperature change, as the mist formed around his hand from his warmth being freely given. His focus moved from his hand, to the sights outside of the window. 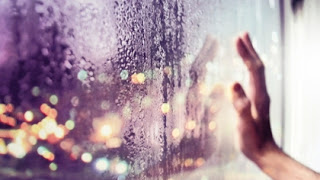 He’d looked through this window a thousand times, maybe even more, but he’d never actually stopped to focus. The silence surrounding him, the lack of movement chilling his thoughts, as he felt his very heart ache. He wasn’t an overly emotional person, stoic even, but the last few weeks had taught him a few valid lessons.

He knew patience, he’d experienced that very word throughout his life, waiting, wondering, whittling away his thoughts until another appeared or something processed. He was used to this or, seemingly, always thought that he was. He genuinely missed human contact. He went to work, he travelled home, yet that contact wasn’t enough.

Daniel continued holding his hand against the glass, watching the street in front of him. He watched as a stray dog, looking like the happiest animal in the world, trotted past the window on the other side of the street. The dog’s tongue, hanging out of its mouth, flapped around with its tail mildly wagging, probably off on another adventure or hopefully on the way home. A few seconds vanished, as a starling landed onto the wall just in front of him. Its head, darting, moving from side to side, probably enjoying the fact that the outside world mainly remained silent.

He smiled, a sad smile, knowing very well that the very things he’d obviously taken for granted, were suddenly restricted. He asked nothing from no-one yet, at this point, he would gladly ask any of his friends, or all of them, for their company. Their time. Within a connected world he was, brutally, disconnected from so much. The digital communication available was a lifeline, yet still seemed distant.

He smiled, laughing to himself, knowing very well that he didn’t really see many of them anyway. It was, to him, all about choice. Confined, resigned, to the instructions and orders of others. The basics, the portions of life, that were the normal occurrences since the very day he opened his eyes as a baby.

Daniel removed his hand from the window, watching, as the ghostly imprint slowly faded. His mark, upon the window, vanishing as quickly as it had appeared. He knew that each of them, every single individual, left a similar mark upon each person they met upon any given day. He wanted to see everyone again, even the people he didn’t know. He wanted to smile at a stranger, to say hello, even if the other person simply wished not to return the moment.

From within rose sadness, his inner monologue rising to the surface, asking for him to do something. He didn’t wish to be a child asking the same question over and over, but sometimes a mind simply wanted the only answer it would accept. He moved from the window, feeling the vacant emotions rise within him, the loneliness, despite having a million and two things to do at any given moment.
He paused, reaching within, holding the growing feelings in his mind, exploring then, nurturing, developing the thoughts to deflect or resolve his inner situation. As his thoughts did what they did, beside him, his phone started to ring. It was the time he’d been waiting for, knowing very well the solace that it afforded his heart. He moved across the room, quickly, grasping his phone to answer. A quick finger swipe later and he heard their voices.

“What are you doing?” a voice asked him.

“Nothing much, just looking out of the window wishing to be out there!” he replied.

Various voices laughed, all knowing, all realising, that upon each day, they all had done the very same, simple, knowing thing. None of them had really realised how much the simple act of looking out of a window, or waiting for a call, would mean so very, very much.