Reaching out, that little bit further with each passing moment, he finally touched her fingertips and sighed a gasp of relief. With added certainty and added endurance he pulled her forward, just enough, in order to reach in with his other arm. Now, with both hands grasping hers, he pulled with all the energy he had. Feet wedged on either side of the building, arms through the hole basically filled with earth, he smiled as her fingers, hands, then arms appeared from under the rubble. 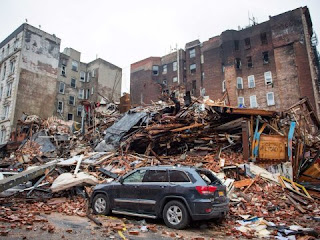 As the rest of her body appeared into view he scooped her into his arms, lifting her as he stood upright, turning to walk down towards the rubble strewn road.  He glanced at her face, a pretty young girl, probably 28 to 34 or somewhere in between. Her face was covered in dirt and dust. He could hear he breathing, shallow, broken, not quite as it should be. He wouldn't blame or say anything to anyone that had been subjected to such an ordeal but, as was his life, he did try to look towards the positive side even if this did not look that way. This was anything but positive. He’d feared such a thing happening but not this close, not this close, to where his beating heart resided.

He knew that no-one had expected such a thing to happen but, like any form of cancer, any type of disease, it didn't really mean that much until it happened to you. His friends, his family, lived a life of virtual ignorance. He’d often thought about talking each of them out for the day, for them to really see what the world looked like beyond the glass covered television and safe daily routines. That, of course, wouldn't help with his thoughts.

Looking into the young girl’s eyes, his smile trying to re-assure her, she started to choke. Placing her quickly onto the ground he called for assistance but, in front of his very eyes, her rapid movements ceased and he instantly knew the outcome. She was gone. Kneeling, a hand on his face, it hit him in an instant and tears formed. The ambulance staff member, as she arrived in front of him, quickly understood the situation and, placing a hand onto his shoulder, nodded. He reminded himself to breath, to take control of the situation, to assess the mindset of his profession. He wasn't made to feel this way but on this day, today, it just simply didn't seem to stop.

Standing and brushing the tears to the side he took a step back as the staff processed the person no longer on this earth. Hands on his hips, looking up into the sky, he simply didn't want to continue. He could walk off, he could simply sit down, but that wouldn't do. That wouldn't be what he was. To the side of him, down the street, he heard shouts for help and, with barely a moment’s thought, he turned to walk. Stopping, he took one last look at the young person taken from the world before her time. He felt a small slice of anger rise within his chest, which tapped a thread of energy into his heart. When this day was over, when the dust settled, he’d make sure that his every second be spent trying to ensure that this situation never, ever happened again.

Walking away, he quickly changed his pace to a mild jog, conserving energy as he went. He knew that this would be a long day, a longer night, but he’d rest when he could no longer stand. He was alive, breathing, able to make a difference and that was exactly what he’d do.

In a perfect world… We’d all make a difference.
Posted by Damian Jones at 14:27