Walking amongst the crowds, watching, viewing, taking in everything around me including the sounds and smells from the people. Almost mimicking slow motion, the way people move, to my senses. Some outspoken, most minding their own business, but all gasping for breath as their emotions leak into the world like a lethal cocktail of pestilence.

I can taste it, taste their fears, their longing, for something else or to even be someone else. The negativity, the jealously, the very fear from their pours creates a stench of unmitigated wealth. I don’t mean to feed, to feast upon such energy, but I was truly created this way. Coughing, spluttering, gouging upon each other, viewing other people with disdain and hatred that seemingly feeds one such as myself. I'm not of this earth, an unknown in the scheme of plans, an unseen entity, wishing for more of this uneven stance. 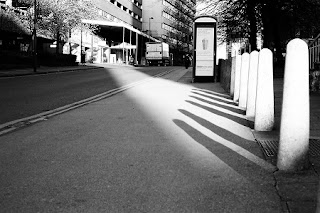 I hear the media, the television, the marketing people of this world, rile people, force them into segregated brackets, ensuring a divide exists within and without. I take another look as one of them walks past, unknowingly tainting the air as I inhale the feelings. It feels hatred, angst, as the images flood through his electrical energy. His friend, possibly a Brother, has what he desires and that alone, something so simple, creates a pointless release of energy. Another one of them walks through me as I envelop what’s within. An uncle abusing him, from a youngster, until this very day, the fear and shame washing over me, feeding me in its purest form.

Satisfied, needs sedated, thirst quenched, I float above them, watching all of the different colours of energy flow through the street. They’re all lost, alone, mostly ignorant to the control over them, how lost they all are, with a few aware of their shape and form. I catch a glance from the shadows, eyes directed towards mine and a feeling escapes from within my own form. None of this world has ever seen me, noticed me, yet there are a few that can see through different eyes. I'm not worried as none can touch my form unless I desire.

Across from me, another of my form feeds, relishes the bathing emotions, the disquiet of this world and suffering of the many. Hurdled like cattle, pretending to be free from oppression, all the while willingly sacrificing themselves to the daily monotony of money. All of them could be happy, all of them could be satisfied, if it were not for the many needs instilled within from an early age. But, of course, that would not do as my form has no need for those positive traits. We desire pain. Suffering. Anger. Raw negative feelings, a hunger, distilled into a pure form of energy.  The heat expelled from these creatures fuels our fire. Drives us, compels us, yet we lift not a finger to aid in this flow.

In past lives we've aided with the neat destruction of society, kindled the very fire of destruction to feed our coffers, stroked the human ego to drive itself towards oblivion. Now, in this time, we lead a passive life, no longer required to steer anyone anywhere. A paradise of greed, corruption, fear, famine and fate. The glorious symphony of anguish bestowed to the many.

This truly is a glorious planet and we will never leave. After all, why would we, we’re perfectly satisfied with the misery fed to us each and every single day.

The Leviathans: Aura (Book 2 - A possible look from the other side). Might even get to write that story one day.
Posted by Damian Jones at 11:48