The warm air exhaled itself through the open French window, refreshing the room, enabling the current events to continue. She’d sat on the chair for at least three minutes, waiting, her heart wanting to beat faster, yet she felt so very, very calm. She could hear him, doing whatever he was doing, over in the other corner of the room. She heard the sound of a zip opening, probably from his travel bag, then silence. Cold, comforting, annoying silence. 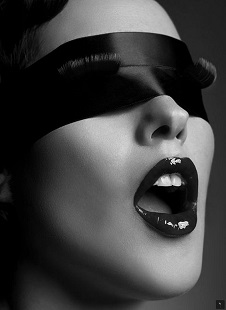 She enjoyed this, all of it, the temptation, the wanton feelings, losing herself to her ever breathing, heart beating, satisfaction. To many this wouldn't even be a consideration but to her, especially to her, it was something she desired each and every single solitary day. She cared not for drama, the ever expanding destruction of another’s pointless issues, as life was for enjoyment. For feeling. For needing, craving and much, much more.

At first all of this seemed a bit strange but, thankfully, she soon caught up to the way that things could be. The side glances, the knowing, the realisation that life could be… more. Much more. Pleasure could be everything. Every thought, ever moment, if you had the imagination, the capability to realise something else existed. She knew that her emotions were directly linked to her very senses, that every single inch of her beautiful body, could be motivated to feel.

She wiggled her nose, just a little, as she wouldn't want the blindfold to move. Arms by her side, wearing the ever so small dress that he’d sent her, still waiting, allowing her mind to drift. She had a few things to do, tomorrow, running through the list but, just then, she felt his fingertips touch the side of her leg. Her heartbeat spiked, her body tensing for a mild second, before all of her thoughts turned to his touch.

Slowly, but not that slow, he moved his finger tips up the side of her legs. Her breathing changed, knowing that this wouldn't stop until… until he decided it would stop. As his touch reached the bottom of her dress he paused, one hand vanishing from her skin, until they both moved and she felt the safety scissors cutting into her outfit. Bit by bit, loosening, as each cut sent a sound to her mind. A few seconds passed, as he motioned with his hand in hers, for her to stand.

As she stood her dress fell away from her, exposing her, once again to his touch. He started, again, at her ankles. Running his touch, his soft smooth touch, up the side of her legs. As he reached her waist his touch moved around to her back, moving upwards, the feelings sending so many thoughts into her mind. As he moved she could feel his calm, soft, breath against her lips. He was right there, right in front of her. She dared herself to kiss him, to taste him, but that would spoil the game and that simply wouldn't do.

As he reached the back of her neck he stopped, moving his touch down and around, just under her breasts, staying away from the places she really wanted him to touch. But, as she knew, temptation, desire, wonder and want often didn't, shouldn't, just be about the places everyone wanted. She was a woman and every single part of her deserved attention. As his touch once again vanished, her mind relaxed a little, her legs starting to feel the moment, as did the rest of her.

A second vanished and she again felt his touch upon her skin. He was behind her, hands again starting at her legs, touching, feeling, the tips of those fingers feeling so tempting. Right now he could do anything to her, she wouldn't care, she didn't want to care, as feeling seemed to be all that she wanted. Far too much life, far too much drama, fading away due to this very moment. As his hands again reached her chest she felt his lips press against the back of her neck, kissing, making her want him even more. She felt his lips move to the side of her neck, her head falling backwards to rest against his shoulder, finally giving in.

She raised her arm, to place it against the side of his head, enjoying every second as, finally, he encompassed her breasts within his soft hands.  She turned, taking his lips onto hers, kissing deeply and as passionately as she could find. He’d been doing this to her for the last few weeks, teasing her, tempting her, but this second was the time to feel. Touching was beautiful, deeply moving, but right now, it was time to feel everything that he had.
Posted by Damian Jones at 09:20