The door slid open with such smooth grace that any person would hardly even know that it was there. No noise, not even a blinking light, as it was set to do one solitary task. Open. Stepping through the airlock and walking forward three metres, placing the white bag onto the cold metallic floor, the man quickly surveyed the interior. He’d seen the diagrams, with the many wires hidden behind the various panels and seals, but it still required a few seconds of concentration. 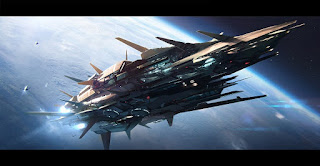 Glancing through the port window he placed his hand onto the glass, if he could call it glass, as he’d studied the exact specifications of such items. Quadruple-glazed, layers of transparent aluminium ceramic composite glass, as well as three 25mm-thick pressure panels. He could place a grenade against the glass and it would hardly even notice. The rest of the structure, on the other hand, wouldn't fair as well.

He could feel the cold, despite the heating and sun bellowing heat from 93.7 million miles away. Removing his hand, leaning over to his bag as he knelt, he started to recall how this space vessel came to exist. We’d discovered a new method of travel, a new energy unlike anything known before, which was shrouded within a secrecy that no-one could fathom let alone realistically care about. We were explorers, ready, waiting, no matter the cost.

He removed a small black metallic type box, the size of a brick, from the bag and pressed a selection of buttons as the display blinked into life.  His mind, still racing, recalling, remembering that his own Father gave his life to test the acceleration of the first prototype. 1 million miles in 12 minutes. 12 minutes after the start his Father was dead, virtually compressed into the rear of the cabin. Emotions aside, he’d learnt to live with these thoughts many years previous, as a child, although they still haunted him to this day. You could learn to accept things, even move on, but if your mind’s subconscious decided otherwise there wasn't much you could do.

Placing the black box, to his side, he removed two more and once again pressed the buttons. All three, now sitting next to each other on the floor, blinked in unison. There was no going back, no way to relent, but that was okay as this was his life’s work. His Father died to bring them here and he was going to die to take them back. He could walk onto a shuttle, return to the planet below, but today was not going to be one of those days. A captain of a ship would die along with his vessel and if he was committing 2,000 people to death, then he’d damn well join them.

He thought about the people, on-board, all laughing, excited, realising that they were about to become history, the historic event never undertaken by man, woman, or child. On any other day, if there were a way to change things, he’d join them on their grand adventure to the stars. After all, as they knew, there were planets out there fit for life.

He grabbed two of the black boxes, placing one to the other side of the five metre by 6 metre air-lock. Walking to the rear of the room he placed the second just above the control panel. He turned and looked at the third box as the inner air-lock door opened. With lightning speed he reached behind his back, grabbed the gun, bringing it to head height as his knees flexed and his eyes targeted. The woman, who had just realised what was happening, placed a hand onto her stun stick. She fell forward as the solid metallic dart ripped into her knee cap, throwing blood forward as well as backwards from either side of her knee. She’d scream but it wouldn't do much good as the air-lock door closed behind her. Grasping her knee, eyes shut, the suit compressed just above the wound, cutting off blood flow, injecting pain killers and allowing her to once again open her eyes.

“We’ve come so far, haven’t we,” he said as she steadied herself, “One moment incredible physical pain and then, nothing at all.” He put the gun back into the rear holster and walked over to the last remaining black box. She didn’t know what to say, her mind racing at a thousand miles an hour, filled with fear, questions, worry and, of course, wondering what he was doing. He placed the last remaining box into the very middle of the room. Finally finished, relaxed, accepting what came next, he walked over to the woman, sat down next to her, folded his legs and smiled.

She looked into his eyes, finding it odd that he didn’t look crazy or delusional. He actually looked kind, even sensitive, a kind of warmth not often found. She pushed her fear aside, “Are they…”
“Bombs?” he interrupted, “Yes, yes they are!”
Her mind collapsed with the realisation. Her children were on this space ship. Her very reason for living, for being.
“I have children here… please!” she proclaimed with as much emotion as she could feel. As she spoke, her leg starting to pulse with the returning pain, her eyes welled, and tears started to slowly fall.

He knew about life, they both did, the cruel nature of things amongst the pure beauty of it all. He would let them live, he’d let them all live, if he could, but that wouldn’t happen. He’d planned for over a year, which meant that the only chances he’d have was, unfortunately, this single solitary moment. He looked down, taking in her pain, knowing how it could feel, “I’m so sorry. What’s your name?”
“Robin.”
“Robin. That’s a beautiful name. What’s your children’s names?”
“Sarah and Oliver.” She replied starting to shake as the shock crept over her.
He nodded, looking at his heads-up display that was being sent from his contact lens. 25 seconds remaining before the bombs would rip away the secondary main air-lock which, in turn, would cause a chain reaction of decompression that would rip away the rear vent seals, causing three internal safety doors to buckle, cave, then completely destroy everything. The section they sat in, right now, was one of the safest areas of the ship for that very reason but, as with many plans, the right tin opener would open any tin.

He leaned forward, placing his forehead against hers, her tears still falling to the ground. “Before we go I want to tell you why I‘m doing this. Please believe me when I say that if there were any other way, I’d take it and spare everyone but there isn’t.” Her crying slowed as she listened, wanting there to be a chance of rescue, of recompense for what was happening, to which he continued.
“You see, this ship is unlike any ship ever created and may never, ever, be created again. We found something, something so unique that it might be a once in a lifetime discovery. We found a power that could cross a galaxy in days, thrust us into safety away from a single solitary point of failure. But there was a catch. With great power there is always a cost. Kings lose their minds, become corrupted. Egos flail or wise men become fools. The engine in this ship needs fuel!”


He moved his head backwards, smiled, as she looked inquisitively through her fear and pain, waiting for the answer. Five seconds remained…

“The power source of this ship is human souls and that’s why it has to stop!”

As her mouth fell open, the realisation for all of the security, the ship’s cargo manifest, the disappearing people, all became clear. The counter reached its last second and in that last moment he leant forward, his own fear taking hold, as they both wrapped their arms around each other.