The door slammed, signalling that he was finally in the other room. She knew, she damn well knew, that he was aware of every single little thing that he did. On purpose, defined and designed, to illicit the momentary jump in her heart. This man, that man a few metres away from her, wasn't the man that her Mother had warned her about all the years previous. He was the type of man that would walk into a room and command attention from every single damn woman. The devil you wanted to know, the devil you knew, the demon that every woman sorely desired. 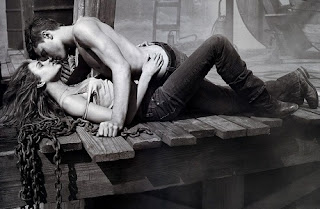 She’d known his name, for the longest time, through the usual rumours and blathering of her friends. His name, that name. Whenever she thought of his name her legs seemed to tingle, her stomach flutter and temperature rise. She didn't really wish for someone, or anything, to have this much control of her body, as well as mind, but there were moments that were inevitable. She was, after all, an animal of sorts with all of the desires and needs. As a woman, of course, she wished and wanted to deny such motivations as they seemed uncouth. A lady should do what a lady should be. Or, at least, that’s the way she’d be brought up.

She closed her eyes, halting some of her more basic thoughts, realising that she’d probably work herself into a stupor. That wouldn't do. Not for her imagination to play a part. She knew that life could be stale, sedate, even drastically boring, which meant that someone like him could light such a fire within.

She recalled the first day they’d met, by off chance, as she frequented her usual coffee shop. They had mutual friends, seen pictures, which meant an immediate connection could be achieved. She spoke, the words falling from her lips as she tried not to babble. His eyes basically did what they often did. She’d been undressed ten times, taken, used, all in that one conversation. He had such an amazing smile, despite his eyes betraying his actual real thoughts. She’d feel disgusted, by the way he viewed her, but in all honesty she didn't mind as he raised something from within by the way he looked.

She chastised herself for being unbelievably superficial, the very notion that she despised. It was no use. She couldn't help it. He’d asked her to dinner, just before he left, the confidence literally destroying any reason to say no. She’d never regret that moment, or any moment, she hoped.

She snapped away from her thoughts as the door opened. He stepped into the room. Him. This. That man. She wanted to smile, to say hello, as she instead sat motionless. She didn't fear him, instead transfixed by whatever it was that he possessed. She wanted all of it. All of him. Up, down, left or right, it didn't matter how hard or how much he made her beg, she’d still come back for more. Maybe it was his aura, the way he stood, not actually giving an absolute fuck for anything at all.

He smiled, letting a moment of genuine emotion escape from his lips. They both knew why she was there, why he was there, neither of them needing to actually say anything at all. He stepped forward, a few steps, holding out his hand to her. Placing her small bag to the side of the chair, she stood and stepped forward, placing her hand in his. The smell of his body caressed her senses as her mind started to spin ever so slightly. She would adore him, maybe even love him, but this wasn't anything to do with that sort of thing.

His hand felt warm, strong, his fingers interlocking with hers as she felt her breathing falter. Standing, face to face, she’d touch his chest if she felt that she were allowed to do so. This was his game, all of his motivation, designed to send those feelings through her body, mind and maybe more. He wasn't wearing a top, his loose pants showing far too much of his lower stomach. The lines, those defined lines pointing towards what she needed, turned her mind towards the right way of thinking.

She stood there, just looking at his defined face. She simply could not get over the way he looked at her. She needed to know, to understand, what drove a man in the way he was driven. The way he touched, the way he held her against him, all created to entice her body to react in the only way it could. She caught herself, late at night, waking up without him, yearning to be touched by his lips. The way he moved over her skin, the way his damn mind worked, all accentuated his fingertips embracing her body.

From nowhere, possibly sensing what the moment needed, he gently moved forward and kissed her. His soft lips gently pressed against hers and moved in a way, that closed her eyes and calmed her heart. It was a kiss that simply said that he’d missed her. The soft, attentive, carefully crafted movements. She felt the strength in her legs start to fade as his right arm moved around her waist, moving her body forward against him.

The kisses, turning from tender, soft, to deep thirst filled wanton gestures, finally breaking any false pretences she’d planned. It was no use. She simply didn't care. Her body was his, designed for him, to please and take everything he could offer. She could feel her body heat increase, nurturing her aroused state as his desire started to rise. She could barely keep her hands from his body, as she slipped a hand down the side of his thigh, her thumb catching his pants as they slipped away from his body.

He smiled, knowing, understanding, that a woman desired what she needed and that there would never be an issue with such a thing. He knew, he’d known for the longest time, that at their base they were simply animals. All the bullshit, all the pretence, the years and years of garbage, getting in the way of the one defined reason for living on this very world.

Her hand moved from the side of his thigh, caressing him as he closed his eyes at the very touch of her soft, perfect fingers. Teasing, tempting, tantalising his very mind to let go of his restraint. She’d often wondered how he could hold back, the way he did, as the following minutes would become wilder than anything she’d known with any other man. All of her sanity, grace, the pathetic pretence of being something more than what they were, would be erased in the furore of his body commanding hers.

Her thoughts fell from her mind as her body finally, easily, simply, gave in to all of her desires. Her body, fully engaged, completely willing to give itself to the next few hours, ached for him to be inside her, around her, lips teasing and tasting her. She would destroy the very room to have him right now, as he gave in to her demands. He removed her hand from his body, lifting her from the ground as her legs wrapped around his waist. He bit her neck, softly, enticing, as the look in his eyes changed from one of care, wanting her, to some type of dark grace. She could not deny that he scared her, despite never hurting her more than she shivered for, the fear actually being from not quite being able to reach the place his eyes hinted at. A level. A deep primal place where urges gave way to an encompassing natural embrace.

As he carried her over to the bed, which they often didn't even reach, his eyes seemed to envelope her very soul and if she were to be lost forever, in this moment, she’d gladly become that animal just for him.