Tiptoeing from the house, along the side of the back garden, she quickly opened the gate and exhaled some of her excitement. She felt alive. Almost frantic with the feelings that she’d not known for such a long time.  Looking left, then right along the path that ran along the rear of her house, she waited as the seconds escaped her. The chances to see him were slim, which meant that she’d gladly jump at any moment. 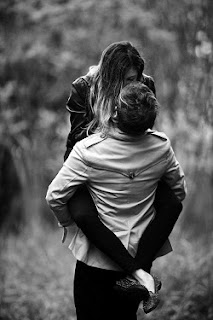 She heard footsteps and, from around the corner, he appeared. They’d met while she attended some function that she’d long forgotten about, despite not managing to forget anything about him. The first thing she noticed were his eyes. Those sparkling eyes of his, mixed with a smile and strangely soothing voice. She’d checked all of him, as he ventured off for drinks and, at no point, was she ashamed at her blatant flirting.

He reached her, as her entire body, mind and more, responded with fluttering delight. He just did something for her, to her, on many occasions. He was that guilty pleasure that she kept a secret. For now. For the moment. Until it all felt right.

“How are you?” he asked, without moving his eyes away from her. That voice, his voice, seemed to reach a place within that just wanted him to continue talking and talking. Thankfully, he didn’t do that, despite the wish being thrown around within her mind. She was connected to him, in more than that physical way, which sometimes made the small moments hard to let go off.

His arms moved around her, drawing her closer as her head rested against his chest. “I’m okay,” she replied, “he’s inside talking with my Mother!” She wanted things to be different and, soon, they would be. She had to be sure, before making the move that could possibly disrupt more than her life. She had to make the right choice, the best choice, for everyone.

She’d heard the promises, all of them, again and again, which meant that despite her emotions screaming for more, she had to finally stop being frivolous with her emotions. She’d cried, more than most, with her tears eventually becoming something of a joke to her common sense. He did seem different. He did allude to being more than the words that promised so much. Either way, no matter how warm he felt, no matter how strong his arms held her, or the way he did that thing with his lips, she’d do this the way she should have, all the years previous.

She felt his arms ease, as she moved her head, looking up into those eyes again. She smiled, which invited a tender kiss to appear upon her lips. He did kiss with thought, passionate, tasting her upon him. He’d often said that she had the softest lips he’d ever kissed which, to her, was the usual rubbish that men threw her way. As he kissed her again, she honestly believed him.

He’d waited for her, never pushed, despite her secret need for him to take charge and have what he obviously wanted. She’d teased, played with him a little, but that was the secret to being alive. The intensity could come later, eventually, with all the playful laughter and teasing keeping things fresh. They seemed to really understand each other, respect each other’s honest desire to cut the bull from the daily grind. Working hard, playing harder, laughing until the world meant nothing, was what they both enjoyed.

“Soon!” she said, as his silent words escaped from whichever part of him was in control. His heart, or his mind, she truly didn’t know and wouldn’t guess. He nodded, accepting, understanding as far as he could. He, after all, did not have children, but would always understand that a relationship with a Mother would always arrive with additional thought. He respected the situation, realising that she simply wasn’t just another one, another conquest or body to set aside once finished with her.
From the very first moment they’d met, he knew, or at least he wanted to believe, that she was the one, and that meant waiting for as long as it would take.

After all, the both of them deserved love, needed love, when the time was right to add another person into the great big mix called ‘life’.