Lucy, sat at the top of the long winding stairs, listened and watched with her mind empty of thought. She’d heard them, again, once more this week, raising their voices in the way that they tended to do. She didn't quite understand why it happened, only that it happened again and again, with Mummy eventually left crying. 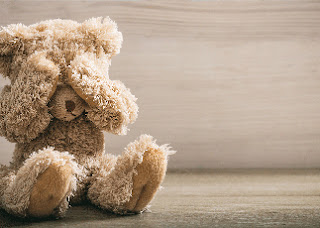 At times, despite her age, she wanted to ask Mummy if she’d been naughty. Maybe she’d done something to upset Daddy, but she remained quiet accepting that this simply happened. There was no reason. It was, like many things, the normality that she was growing into. Her teddy, held tightly to her side, obscured her face a little. Just in case. Just in case the shouting became too loud as that, to her young ears, was when she started to feel very afraid.

Both of their loud voices crossed each other, the words filled with venom, filled with the vile looks that each of them threw across the room. She wasn't sure what had started it, this time, with Daddy returning home from wherever he’d been. She did wish that they’d stop, to hold hands like they used to do, the days that had since vanished. Her heart was so young, truly innocent, not meant to witness such events despite the Mummy and Daddy often hiding their solemn looks and viper like glances.

Mummy loved Daddy and Daddy loved Mummy. That’s the image she held onto. Wished for. Longed for, as that was when everything was happy. Would be happy. She stayed perfectly still, that teddy being held that bit tighter, as Mummy crossed the room to point a finger towards Daddy’s face. It happened. Again. Daddy slapped Mummy. It happened so fast, with the silence filling the room with stagnant energy. Mummy fell to the floor, holding her face, as she started to cry. Lucy gasped, hiding behind the teddy, with one eye still watching. Daddy knelt beside Mummy, saying that he was sorry, that he’d change, with Mummy eventually hugging him.

She’d seen this a few times, over the last few months, with the frequency increasing as the days moved forward. She knew that something was wrong with Daddy, that things had changed, but to her small heart she knew that Mummy had done nothing wrong, to deserve being slapped. She feared Daddy, for hitting Mummy, her behaviour becoming one of a good girl, whenever Daddy was around. Mummy held her hand, often, especially as the hours moved through the day and Daddy returned from wherever he’d been.

Lucy stood, slowly, turning to silently walk to her room. She didn't want them to see her, for them to know that she’d been naughty. Creeping out of bed to ask for Milk, or water, was one thing, but listening to Mummy and Daddy simply wouldn't do. She didn't want to be slapped, like Mummy had been slapped.

Climbing into bed with the duvet covering her, as she hid beneath the covers, she held the teddy against her. She wouldn't let go. Never. Teddy would protect her and, of course, she would protect teddy. “Don’t worry teddy, we’ll both be good and never, ever, want to be slapped!”

Her eyes closed, her mind drifting away into the world of sleep, not quite understanding or realising what all of this meant.

Lucy placed her bag onto the side chair, closing the front door with her foot, shouting to Derek to say that she was home. She’d known him for a few months, the relationship accelerating quite fast as he was, in all honesty, quite sweet. She knew that he had issues, unresolved events from his past, but so did she and that made the both of them unique. Both survivors of the daily grind and hardships of life. Her career was at a high, the accomplishments actually being rewarded for a change. She smiled to herself as, finally, she was known as ‘one of the boys’. The same old world, the same old clichés, the lines between men and women becoming blurred as the days moved in front of her eyes.

She undid the top button of her shirt, whilst placing her shoes onto the floor rack. This was one of the best moments of the day. The success of making things happen, then finally being able to switch off, relax, unwind and let her guard down. Working with men was ruthless, fun, crazy, but often so darn annoying. A few of them really needed to wash, or at least try to comb their hair. She shook her head, letting a small laugh escape from her lips, as Derek appeared from around the corner.

She took one look at his face, instantly realising that he wasn't in the best place. His clothes, his suit, ruffled and tatty. “What’s wrong?” she asked with concern. He shook his head, standing there, not able to look at her. His upper body moved, side to side ever so slowly. She stepped forward, reaching out her hand. He stepped back, as she smelt the alcohol from his breath. The smell, strong, as she realised what the stains upon his shirt were. She lowered her hand, giving him space, “What’s wrong?” she asked, again, the concern written across her face and from the way she said the words.

“I got let go today!” he replied, finally managing to look at her. Her mouth opened with genuine shock as his face grimaced at her. He looked genuinely evil, a different man and most certainly not the man she’d known for the last few months. She didn't quite know what to say, as he stepped forward, “Apparently I’m not perfect for the job. Unlike you. You never seem to do anything wrong!”

She started to reply as his hand appeared from nowhere, striking her face. She took the slap, hardly moving, as the thoughts exploded in her mind. She couldn't believe that this was happening. ‘You didn't deserve that,’ said her conscious mind. She wouldn't allow the shock to control her, to shadow the current events.  She’d seen this before, all those years previous, which she now understood. She’d never forgotten what had happened to her Mother and, thankfully, she’d never wished to know despite the pain it brought her thoughts. She understood the events, researched them, and realised the rationale behind how the moments seemed to unfold.

She clenched her fist, wanting to hit him, but quickly remembered that it would probably justify his reason for hitting her. She could break his nose, shatter his teeth, but he simply didn't deserve the attention. Any attention, from this point forward. She backed away from him, her eyes locked onto his, in case he made any move towards her. She felt the door against her back and, slowly, she opened it and stepped to the side.

“Leave. Now!” she said, her voice clear, defined and authoritative. He stood there, her eyes still holding his gaze, with both her fists clenched, with her teeth gritted in defiance to the events. He stepped forward, slowly, his face showing his disdain for her. She never thought this would happen, especially to her, but that was the case with so many men and women.

He stopped in front of the doorway, “You’ll regret this!” She held her emotions in check, not allowing anything to escape from inside of her, despite the adrenaline pushing her to act.

As he moved out of the house, Lucy stood in the doorway, watching him leave. She knew that he had issues, she’d known about certain aspects of his past, but she wasn't ever going to allow this to happen to her. On no level, in any place or situation within the entire world, would she ever deserve the anger of a partner to be pushed against her. She’d spent such a long time being as good as she could be. She’d matching all of the people around her, cultivating the fire within, despite the events of her childhood.

Closing the door, she locked the dead bolt. Quickly, with calm holding her together, she walked to the back door to check if it was locked. She just needed a moment, before calling her older Sister, then the authorities. She walked up the stairs. Still holding her inner panic at bay. Despite her control, despite being able to physically protect herself, there was no denying the turmoil within. This was personal, the physical events becoming nothing but emotion within her.

She walked into her bedroom, falling to her knees, as she opened the bottom drawer. Within, sat a box and, after removing the lid, she picked up the teddy and held it against her. The tears appeared from her eyes, as she held the small teddy against her. As tightly as she could. She’d made a promise, many years previous, that she’d never forgotten. She’d been as good as she could be and no-one, no man or woman, would ever, ever, be allowed to slap her without consequences being returned in full.

She pressed the teddy against her chest, wiping the tears from her face. A few moments escaped her, as she held her thoughts together. She removed the phone from her pocket, pressed the contacts and dialled her Sister’s number. She would never let this remain a secret. Ever.