Danny picked up the sword, dancing as she did, only to quickly slash the approaching individual. She loved this song. Adored the chorus, the beat, the way the lyrics formed the emotions within her mind. It was, to her, the perfect upbeat rhythm for doing what she loved most of all. She loved to hurt people, really, really hurt them, if they deserved to be hurt. 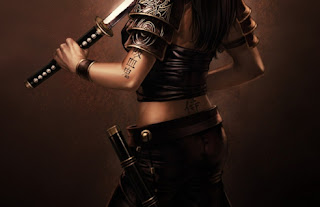 At an early age her sense of justice, of fair play, seemed to be ingrained within her very soul. Live, or let live, being her general stance of the moments that appeared. Until, that is, someone did something wrong. Her parents used to be wary of her swift justice, even as a small child, whilst also laughing out of ear shot as they, honestly, agreed. You could push most people, again and again, until they eventually pushed back or flailed around. Usually, people just soaked up the nasty side of life, but not her, not Danny.

This latest debacle, the current hack and slash of things, arose from the local bad people doing what they did. The rule, crafted a few years previous, was that they’d leave her alone if, of course, she’d stop killing them. Sure, truthfully it worked for a while, until they hurt someone that she cared for. There was no justice swift enough, no court within the land that would pacify what they’d done, with the trial, decision and comeuppance becoming immediately due.

Here she was, there they were, in front of the person she wanted to have a word with. Once again, her hips swayed, side to side, with the ever-increasing beat matching her own beating heart. The words, embracing her, connecting to her, entrancing the next sword movement. She loved weapons. Large, small, secret or in your very face, they all did what she wanted them to do. Hurt. Give pain. Teach a lesson with no words involved.

She smiled, as another fell away to her side. She, thankfully, couldn’t hear their agony filled screams, due to the expensive over ear headphones cancelling the external ambience. She raised her arm, hand in the arm, moving side to side with the vibrant music pumping in her ears. This, to her, was so much fun. Ideally, she’d prefer to be dancing in her bedroom, or front room, or any room, with this place being the second prize in a raffle of locations. It didn’t matter, as she was having fun either way.

She was the daughter of a long-forgotten family of stoic thinkers, the reasonable few, that strangely thought about how to inflict pain upon a person that deserved such things. Growing up, it proved useful, whilst also learning self-control. She’d had her wings clipped, a few times, by her Father as well as Mother, which taught her control as well as respect. The balance, of all things, within all situations, filling her thoughts with a defined and unique perspective of the world. She could see the corners, the rooms filled with lies, the expressions that lacked detail, as well as the hidden motives behind most souls.

It mattered not, as the long blade once again cut the truth into another individual. She wasn’t damaging them that much, only a little, just enough to remove them from the game being played. The song neared its end, as she stood in front of him, the transgressor, the perpetrator of the physical deed that hurt her friend. She swung the sword around and around, the professional at play, the perfect balance of the sword being used to her advantage. The silence appeared, as she slid the headphones away from her ears, to rest around her neck. He sat there, defiant, reliant on his status to protect him, knowing the implications of what he’d done.

She smiled, as her head ever so slightly moved to the left as her thoughts rampaged through her mind. She didn’t wish to remove the head from a snake that could be replaced by an even bigger snake, but punishment for actions had to take place and, right now, her mind was concocting so many beautiful, dreamy, playful ways to teach him a lesson.  She leaned forward, her face inches away from his, as she felt his fear start to rise, “Now… let’s talk about that Halloween payback!”