The darkness surrounding her seemed comfortable, relaxing, with one of her senses obscured from the current events. She needed these moments. She craved them, desired them, as well as feeling them within the silent moments of her day. Buttons, to be pressed. Feelings, to be experienced. 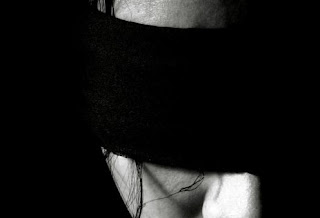 Her working week was now over, for the next couple of days, which meant that she’d headed straight for his arms. He didn’t say much. He didn’t express himself in the same ways, but what he did do, was write his name across every single inch of her body. He’d often state that he owned her body, some of her mind, and possibly a slice of her soul. She didn’t care, when the chemicals within started to mix. The spiral, the cascading need within simply asking for more. Much, much more.

She pushed aside the moments, the thoughts, moving them from her mind as her legs moved together. Her ankles, cuffed, connected, pointed straight up into the air. Bonded, roped to the ceiling. She knew that he enjoyed her legs. Strong, crafted from the many runs, the hours of exercise and, in all honesty, she’d prefer to show them in this setting instead of some fancy dress. This was raw, the realism being felt, instead of showed or wished for.

He could lie to her, he could say a million words, but instead he chose to use his touch as the method of communication. His fingers ran themselves slowly down the sides of her legs. Touching, feeling, expressing their need to be upon her, inside of her, doing what they were made for. She smiled, the blindfold still obscuring everything, as she felt the paddle gently slap the side of her exposed backside.

His hands found hers, as he slipped them into soft padded cuffs. He wanted her to feel and the more control he had over her body, resisting the glorious feeling, the more she would experience. Her world, the boring, the sedate, all factoring into the very reason that she needed to be here. She needed to feel, to be higher within her mind, which normal life would not allow. This wasn’t just sex, this wasn’t lust, as he vigorously needed to please her. She knew that he enjoyed every single inch of her body and, if she were honest, he probably knew those inches better than she herself did.

She groaned, head moving to the side, as he suddenly embraced her lips with his. Teasing, tasting her, his hands still gently moving along the sides of her legs. She imagined him, prone, his back arched, tasting her, experiencing everything she had upon the fancy display that he’d created from her body. He’d often say that she was a crafted work of precious art. Defined, styled, the curves and parts being exactly where they needed to be. Should be.

She loved this part. He knew, she knew, what came next. He told her how she should feel, finding exactly where, as well as what to do to her. He’d tease, he’d tease her until she wanted to damn well force him to obey her needs. She’d laugh, knowing exactly why he restrained her, but laughter was far from her mind as she felt the tip of his tongue slowly move up and down. He was cruel. He really, really was just so cruel to her. She wanted more, everything, right then, now, as soon as possible, while knowing that everything would come to those that waited.

She moaned ever so slightly, her head moving forward, as she felt his fingers find their given purpose within her. Her breathing started to escalate, with her bodily senses embracing every single rush. Each movement, each time he moved over and inside of her body, she allowed her mind to simply feel. He controlled every inch of her, as the rhythm increased its intensity. She knew that the teasing had ended, as his arm moved under her backside, moving her up and forward slightly. He searched with his lips, his tongue ensuring that the rhythm stayed exactly where it needed to be.

Each second, glorious. Each movement, edging her further and further towards her destination. Her hips started to move, no longer able to be contained and restrained by his bonds, as well as arm. Her mouth fell further open, the feelings reaching the very tip of her resistance as, slowly, she let all of her inhibitions free. Her legs tensed, her hands trying to find something to grasp, as she finally, thankfully, enjoyably, gave way to the moment.

The release. This release is what she needed and, frankly, would not have this any other way.