Sarah kicked the door’s frame a few times, her slight anxiety starting to rise within her body. Each day she lived the same life, the same routine, with an identical set of circumstances and resolutions. She loved the order, the stable platform that she’d had her life decisions placed upon, despite the caged reality being something quite, quite different. 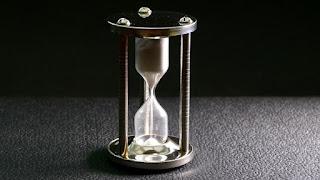 Another few taps and she turned the egg timer, starting the rushed five minutes of her life. The next part. The episode of de-escalating time. As soon as the first grain of sand fell, she stepped forward, closing, then locking the door behind her. The keys found her pocket and as she moved towards the small wooden gate, she felt the adrenaline rise within. Her mind rushed that little bit faster, as she headed towards her next destination.

The bus stop, within a short walking distance, appeared within her view. She checked the small egg timer, which was carefully held upright in her left hand. She had time. Quite a lot of time. Easing her stride, she calmly approached the stop and, leaning against the post, exhaled the daily strife. Each day, the same. Each moment tested and measured.

Her thoughts, for a second, flew back to the moment when her Mother had first introduced the egg timer. Her Mother, being who she was, wanted order within her world. This, evidently, extended to Sarah’s life. Five minutes to clear her room. Five minutes to wash and dry the dishes. It did create an order to her life, as well as the unfortunate regimental practises to which she was now bonded. She simply could not function without order, unless she were being timed.

Her friends accepted her, the few that she had, realising that parents often inflicted such horrendous rules upon children but, to Sarah, this was as next to normal as she’d ever known. Her thoughts returned to the present as the bus arrived. Today the driver was Henry, a wonderful man who always nodded to say hello. She watched as three other people boarded the bus, until it was her turn to step forward. Showing her pass, smiling, she found a seat and rested.

As the bus moved along the street, the choices no longer hers to control, the decisive situation out of her hands, she looked at the small egg timer. It featured a plastic casing, with the usual clear plastic section, displaying its figure eight with moving sand. She’d watched the sand move, as a child, on many, many occasions. She’d smile, laugh, knowing that she’d beaten the time. The alternative didn’t bear mentioning as she, sadly, recalled the many, many bruises. Time could be her best friend or, upon a given day, her brutal enemy.

As the very blood within her body found calm, she looked up to see her stop appear in the distance. She smiled, knowing that the next test would be upon her. In a way, a very twisted way, she enjoyed the trial, despite her own mind chastising her if she didn’t accomplish even the smallest of her chosen tasks. If she were to start a task, it would be timed. If she were to venture out, it would be within a limited distance. Such was her world, her decisions and choices.

A person behind her pressed the buzzer to stop the bus and, as she stepped from the vehicle, she twisted the egg timer. Five more minutes to shop. Three hundred seconds to reach her target. She knew exactly what she needed, where to find them and the quickest route to take. She’d mastered her course of action over the many, many years. The process, which staff member that she would use, or throw away her time, in a certain way. Entering the store, she collected a basket and walked as fast as her legs would take her.

People would sometimes stare, wondering why a person was rushing so quickly, which would pass as it still all seemed perfectly normal.  She found the first item, her blood pumping as her heart rate raised itself to sustain her energy. She felt the anxiety press against her thoughts but, as long as everything went to plan, each visit would usually take less than three minutes. She knew that she was a slave to another’s processes and ideals. She knew that there could be a way to escape, but life was her exact life and each step, was ground into her very soul.

She reached each item at speed, her eyes flicking across the shelves just in case anything had been moved. She often found that the shelves would rotate but, thankfully, she’d memorised the monthly changes with ease. Her list, also within her thoughts, reduced as she placed each new item into the basket. Mentally ticking as she went, ensuring each step pushed her towards the place she needed to be.

She smiled, glancing at the egg timer, realising that she could possibly beat her best personal time. The rush within her increased, pushing aside any fear, as it also pressed away anxiety. As she monitored herself internally, she reached the self-payment section and started the process. The two gentlemen, serving that day, would waste far too much time. She placed the egg timer on top of the plastic next to the display and scanned, then packed, with the absolute perfection of a person that could fold Christmas Paper for a living. Each item, perfectly placed to ensure the optimum space. This was another of her Mother’s supposed gifts that was drummed into her thoughts.

She finished the packing, pleased, happy at the time, as she calmly pressed the card against the card reader. The beep of her card being accepted, as she checked the timer, made her legs flutter ever so slightly. Accomplished, succeeding, the thought of her Mother not admonishing her, sent her emotions into a flurry of happiness. She placed her card into her bag, as she picked up her shopping with her right hand, her left collecting the old egg timer.

She turned and, as her body moved, another customer nudged into her side. She watched as the near slow-motion event took place as her left hand moved forward, releasing the egg timer into the air. She screamed, watching, as the timer hit the floor and smashed to pieces. Sarah dropped her shopping, the shock and feelings hitting her all at once. This wasn’t supposed to happen. The timer, given to her by her Mother as a child, was timeless, her comfort blanket of sorts. She stepped forward, dropping to her knees, as she placed a hand onto the broken timer. Her mind emptied of all thought, the utter disbelief grasping at her sanity.

She half expected to be punished, her deep ingrained memories reminding her of what would come next. She waited a few seconds, in silence, as the rest of the world continued with the day. As the timed seconds escaped, nothing happened. There was no punishment. There was no bruise waiting for her. She stood, taking a step back, as she collected her shopping bag that thankfully hadn’t broken. Lost, adrift, not quite sure what to do, as she simply opted for the most defined of actions. She’d continue with her chosen task.

She walked from the store, slowly, not quite understanding the significance of what had just happened. Her mind, still blank, searched for answers, as she returned to the bus stop across from where she’d arrived.

The bus arrived, with the journey back to her home being one of complete silence. She felt nothing, no rush, no adrenaline, no racing heartbeat or any emotion at all. The moments escaped her, as she eventually reached her door. It opened with a quick twist of her key and, once inside, she calmly placed the shopping onto the kitchen table and then sat down.

She looked at the clock on the wall, not quite knowing which minute she’d arrived home. She looked at her hands, no longer shaking, as they often did, being cut adrift from her vice and safety net. She was finally free, after all of the years. She’d only ever, in all her life, owned one egg timer. She did not know what would happen next, today, or the next day. She felt calm, steady, as she stood from the chair. On a normal day, upon each day, she’d make herself a cup of tea. A timed cup of tea. Regulated, defined, the process being one of numbers and fine grains of sand.

Finally, today, as she smiled, she realised that time was no longer able to control her. No longer measured. No longer refined by the seconds. No longer controlled by the falling of sand. No longer timed.