She pressed herself against him, his back to the wall, with the wine still fresh upon her lips as she smiled. The shadows couldn't hide the facts, any facts, despite the loud blaring music vibrating through the very wall he rested upon. She knew, he knew, they both knew, that he was powerless to stop anything that happened. The spider, the man caught within her very web, of intrigue, of impending pleasure and more. 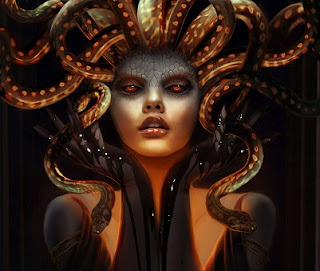 He placed his hands upon her hips, part of him wanting to push her away, to close his eyes and be somewhere else, but that simply wouldn't do as he was transfixed. The way she did things, the little things, the small indescribable moments. The looks, the nudges, the ever so subtle flirting, drove him deeper and deeper into a place that he didn't like. The fear, within, always hidden from all but the most observant in life, reminding him of his past. Those moments. He knew that everyone had them, understood them, but he didn't wish to embrace such moments.

He smiled, as she placed the wine glass onto the table beside the both of them. She most certainly knew how to dress, always, as they say, to impress. Right now, as he held her against him, the curves and presentation being something to admire, he knew that if he kissed her it would be the end of him. Falling, despite the reservations, would be all he’d know. He’d laugh, even shake his head, if it weren't for her eyes holding his gaze in check. The windows to the soul, the truth of all intentions, right there in front of him. Her lips, pursed, enticing, tempting, taunting him to simply let go.

Her head slowly moved to the music, the essence and mood enlivening her resolve. She was feeling the moment, in more ways than one, which was exactly what she wanted to do. Her hair, moving to cover part of her face, finally broke him. It was his thing, a woman’s hair. He couldn't explain why, or when that had started, but he couldn't deny that she was absolutely beautiful. He moved the hair from her view and, as his hand moved, gently ran his fingers down the side of her face, along her neck, before returning to her waist.

That alone, that moment, was enough for her to finally break the distance between them. He couldn't, even if he tried, recall the solitary second between that moment before her lips met his. His eyes closed, feeling, as she pressed against him even further, lips moving with obvious intent. So soft, so supple, gliding with the finesse of someone that truly could express themselves. His arms wrapped around her, holding her to him, as he could feel his body weaken despite the firm grasp. Each second that escaped compelled him, trapped him, ensured that he’d want to stay with this one forever. A simple moment, amongst the hours of conversation, drawing his mind into the place that he honestly wished to be.

She moved her lips away from him, reaching for the wine, her hands shaking ever so slightly. He knew what and who she was. She’d already played a few of the known games, the established routines. He knew that she was dangerous, maybe even deadly, but that didn't matter to a man such as he. He was hardly innocent, within his small world, but he knew the signs and wouldn't back down even if asked. She was a red-blooded alpha female. She got what she wanted. She wasn't afraid of anything, or anybody, which meant that his feelings would always be secondary. That didn't matter, that wouldn't worry him, as his feelings were his own to look after.

He enjoyed her tease, the words she used and the moments where he met her innuendo with shocking vigour. He would challenge her, on every single level, backing down when needed, or rising to her challenge when required. Her equal, without every needing to actually say so. He knew her worth, he realised that she would be a handful, in many, many glorious ways, but that didn't matter as that was life.

She smiled, knowing, understanding, exactly what she was doing. She’d got him, pulled him in, getting exactly what she wanted. Once again, he knew what the smile represented, and he didn't actually care. She could and, hopefully, would do whatever she wanted. He looked to the ceiling, also smiling, exhaling, knowing that his life could be ripped apart. It was perfectly fine, as despite the situation, regardless of the moment, he knew that she could try to hurt his heart. That was also okay, as she truly didn't know, or even realise, that his heart was already made of stone.