Lying upon the soft bed sheets, with the window open to the world outside, her thoughts simply kept on doing what they often did. Taunting her, annoying her, speaking words that simply tried to crush her dreams and ideals that she’d like to pursue. She didn’t wish to think this way, as she did truthfully believe in the word ‘fate’, the word that often seemed to ignore her just as her future was within her grasp. 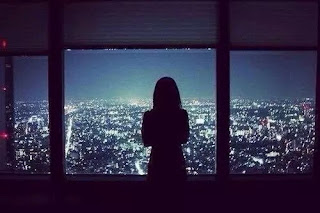 Time. Again and again, that time had eluded her far too much. She’d often feel frustrated, annoyed, but that was like an old friend visiting to say hello once again. The familiar face, the same old same old, words or rhyme and idiotic reason coming together to keep her warm. She looked out into the dark sky, the half moon possibly asking for her thoughts to change, as her heart seemed to beat within her very ear. She consoled herself, reminded herself, that things could be far, far worse. She was warm, healthy, fed and living a reasonable life. She, of course, wanted more. A lot more. The sorrow, deep, expressive, once again pushed aside.

She would never say that she’d been deprived, as a youngster, as she didn’t know what she’d missed as it was never there. She simply wanted more, more love, more harmony and, just maybe, someone who actually adored her. She let out a small laugh as she reminded herself that her taste in men, would never quite manage to get to that ideal. Her platitudes tired her yet, right now, she could not sleep. She’d count sheep, but there were far too many beautiful stars to count. Her eyes became heavy, for a brief second, as her breathing slowed. She closed her eyes and, suddenly, felt the air brush past her body. She opened her eyes, as her shock flew to her heart, causing the beats to quicken as her mind caught up to the situation. Upon the balcony stood a man, with pure white wings.

She hunched herself into a ball against the headboard, as the spectre smiled. Unable to remove her gaze from his, she said nothing, remaining silent as he stepped into the room. He was, despite the fear, panic and possible threat, beautiful beyond compare. A statue of the perfect man made real, within her reach and bedroom. She controlled her mind, not quite understanding her raging, idiotic thoughts, as he stopped a few inches from her bed. She wanted to smile at him, maybe even run to the bathroom to check that she looked presentable, despite the situation, but that also defied belief.

He raised his hand in a calming gesture, as he spoke, “I’m not here to hurt you!” he said, with such a calm and comforting voice. His words were like the softest music playing within her ears, connecting to her heart and imagination. She bit the side of her lip, to see if she were sleeping, which only hurt. She’d watched enough films to realise that he must be having some type of effect over her body, as well as mind. She simply could not take her eyes away from him. Muscular, taut, the type of body that she’d only seen a few times, but never managed to get into her room to do all of those things she loved to do. A dream or not, she remained curled up, safe, hesitant to move. She’d scream, but the chances of anyone hearing her, were remote in such a location.

“What do you want?” she asked with fear, interest and confusion all mixed together. He did, after all, have wings straight from some type of science fiction film or a holy picture.

“Don’t you want more from your life? I could hear your thoughts from a thousand miles away!”

She nodded, once, no longer able to do anything more than listen to each and every single word being spoken. Influenced, inflicted and maybe mildly conflicted, she knew that she did want more from her life. It was obvious. Her day to day meanderings bored her, deadened her joy for the moments that she once found fulfilling. He continued to speak with that glorious voice of his,
“I can offer you everything you desire, give you that charisma, the drive, to seek out your given opportunities and become something more!”

Her mind started to somersault as images flooded her consciousness. The holidays, the cars, the moments and aspiration to be noticed by all, allowed her to lower her defences as she decided to no longer hide herself. She moved away from the headboard, slowly, resting upon her legs directly in front of him, looking into his glorious eyes. “Tell me more,” she asked, with an odd vibrant interest and glee she’d not felt for years.

“There are some people that are meant for more, to be liked more, loved more, with anyone else that has a different opinion being a jealous hater. You… are meant for more. Make the choice, change your life, make it so, and I will bestow upon you the confidence you need!”

Her smile grew, her soul literally warmed her chest, as butterflies appeared within her stomach. She’d pinch herself but, after biting her lip, it might not be the best decision. She nodded, hearing his words, accepting them, embracing them as her own, as she answered, “I accept your offer!” A part of her mind tried to scream in defiance but, as with many choices of desire, lust and life, it was now far too late.

“But you haven’t heard the price of such things?”

She shrugged her shoulders, knowing that she was, more or less, already dead inside. She had a thousand ways to find sanctuary, a better place, but knew that she’d ignore them all for that fast track ticket to the same destination.

She laughed, wondering if she actually had such a thing, after the scenes that she’d witnessed through her life. She’d completely accepted, as she continued staring into his beautiful eyes, failing to notice his wings slowly changing colour.

“Is that all?” she asked with genuine interest, soulfully wondering if such a moment was real.

“Well,” he said, as he pulled at her lingerie strings, his dark black wings further enticing her,  “maybe one other thing!”

She smiled, she laughed, as she then pulled him on top of her as she felt his lips against hers. If a soul was the only reason to have the perfect life, then she’d gladly, openly, truthfully and forever more, give such a thing away.