Weightless, drifting, with eyes firmly closed as a tear slowly rolled down her cheek. She’d run, hide, scream or even wish another way but, right now, there was only weightlessness. Nothing more. She adjusted the temperature control valve, knowing, realising, that it wouldn’t be long before everything would end. 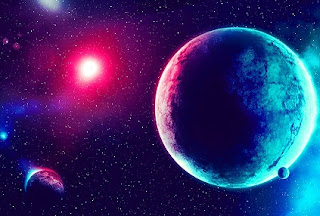 The primary oxygen tanks depleted, leaving only the secondary, with time being her only friend. This was supposed to be a simple task, a solitary manoeuvre out here in the dark, bleak, vastness of space. Then, from nowhere, they left her. Adrift. Screaming. Brandishing the realisation that she could do absolutely nothing to save herself. Her heart, beating faster than she could currently control, echoed throughout the sterile suit’s environment. She gathered herself, the deafening sound of her breathing, reminding her of her training.

She opened her eyes, looking at the barren, burnt, desolate planet in front of her. The Earth, her home, finally succumbing to the realisation that nothing lasts forever. She recalled the stories, from her youth, that described the ending of days. Her own grandfather, her family, stating that it would either be fire, or ice, that would take all of them away. The thought chilled her spine, even then, with her course of action becoming clear as the years moved forward.

Space, for her, would be the last bastion of saviour. She recalled the day the entire world was given the catastrophic news of impending desolation. A forgone conclusion, the order of things finally being reduced to nothing. At first the world sat in silence. A brief reprieve, before the chaos. Instead of working together, she watched as the world tore itself apart. Boredom, fear, the instability and insanity of society, finally coming apart. Riots, anarchy, chaos, destruction and brutality never seen before upon the world. The planet itself did not seemingly need to die, to end the suffering of the Human Race, as humanity itself was perfectly capable of doing so on its own.

The days arrived, the months, as the very life-giving sun etched scars across the Earth’s surface. The very bricks, the buildings themselves, melted to nothing. The planet, no longer supporting the eco-system that once kept the sun’s wrath at bay, simply dissolved to nothing. The axis of the Earth, of course, meant that there remained a few remote locations that supported a moderate amount of life. Oxygen depraved, any and all survivors wore respirators at all times, unless within a sealed environment.  They had all realised the hopelessness of the situation, but continued, nonetheless. The motions being followed with each and every single gesture and order.

They’d made that last-ditch effort to save some semblance of Humanity. The last Ark, the last attempt, to save something. A thousand souls, a thousand chances of reaching a new safe haven of rescue, before everything was lost forever. The man-made creation, five years in the making, sat in space until the final shuttle arrived. She’d been assigned to the auxiliary crew, the last few to check the safety and continuity of the very craft taking them to a new place. A new start.

All checks confirmed, all notifications made, she presented her very last words only to see the craft accelerate away from her. There were others, just like her, but they’d drifted in another direction. The worthless few, left to die, to suffocate, the worth of a person’s very soul thrown into the cold, vast, expanse of space. She’d cursed the person that had made the decision to end their lives. Her life.

She smiled a sad, betrayed, sorrow filled smile. Her best face, her lips that had expressed such joy and adventure of the possibilities of the Human Race, finally exasperated by her final fate. She sighed, filling her mind with anything that made her heart warm and her soul glow. She wouldn’t allow such an ending, such a place, to deny her the love that she felt within her heart. She’d given her all. She’d sweated blood, tears and more.

She’d once imagined her end of days, being one of solace and love. Surrounded by the few, or many, that held her heart with the soft, caring hands that realised the precious nature of each living entity. This was not worthy of such a dream.  She felt her stomach ache and her heart yearn, for another way. Pushing aside the feelings, she reminded herself of her sacrifice, the very work and energy that she had given. She’d achieved, flown, literally, higher than most people in her life or even upon her world. She’d accepted the highest honours a person of her stature could achieve and yet, upon two of her most beautiful days, presented the world with two living, breathing, children of her own.

She’d brush aside the tear that seemingly wished to stay against her cheek, if it were not for the complete inability to do so, as she, instead, focussed upon the oxygen warning alarm. She closed her eyes, again, resting. Breathing. The last few embers from her burning heart, slowed to a peaceful pressure, allowing her life to slowly drift away within the echoes of space. Vast. Beautiful. Endless. The same words, said again, described her very heart and soul. She was, finally, weightless.