He looked out into the bleak wilderness, the cold air and harsh weather seemingly calming his inner voice. He was, for a better word, at peace. Finally. Expectantly. Thankfully. The previous days, harsh. The reasons, justifiable. The outcome, understandable. The result, betterment. 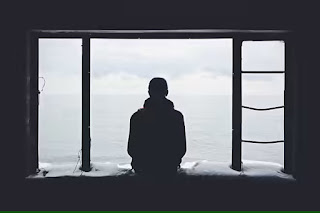 He watched as a small leaf gently wisped across the sky, just out of sight, but close enough for his weary focus to see. The small things in life, the moments, the calm within found, expressed and enabled for all to see. He’d suffered, he’d broken in two, but what was broken could be fixed and re-born anew. He’d studied, amplified his knowledge, changed his outlook, realised and, most importantly, felt the change within. The blind shackles removed.

The silence invaded his space, his emotional level connecting to such a silence, equalising his frequency to that of peace. He enjoyed the peace filled moments, the reflection of his soul within his actions. He’d protected himself, kept quiet for months without end, each day being the only day that mattered. The solitude of the one, becoming his everything. He had further plans, more adventures but right now, the calm would be his closest friend.

He'd read books, many, many books. He’d watched videos, so many videos. He’d gathered a new structure, different avenues of thinking, as well as taking far, far too much into his mind in such a short period. The overdose, the influx of information, seemingly scaring his brain upon the other scars that hadn’t even managed to even gasp for healing air. He wanted to change, as his previous fabrication, had failed.

Done. He was done, for now. He needed air, clean air, inhaled gently, filling him with the calm energy of the universe. Then, and only then, he’d cleanse his heart and exhale any imperfections as well as negative forms. He wasn’t quite ready, but ready was a place that existed no matter his form, function or ordeal. The now of the never, not quite right at this time.

Within the moment, he was happy just sitting upon a mountain, looking out into the abyss of the water in front of him. The night previous, he’d listened to a hundred affirmations, exalting his peace within. The inner, far more important than the outside exterior, despite the world stating that you had to exude beauty. He witnessed no current use for clothes, beauty or other, as he had to fix the inside of his confidence, before allowing the external beauty to show his inner energy. He’d listened to hours of rain filled thunderstorms, his inner-child finding comfort of memories long gone.

He'd recalled the images of being a child, when all electronic devices were switched off, aerials unplugged, as silence descended upon the family. The static within life fell to the floor, as the calming sounds echoed into the ears of innocence. He was told not to look, but how could one not look at nature’s beauty as it struck the earth with such energy.

He wanted people to be beautiful, within, their energy being something of thunder, mostly subdued but still allowing a heart to beat. Some people were loud, some silent, some withdrawn and some asking for life’s abundance. The shame arose from the external, with so much time being spent with superficial beauty. He, in ways, was no different.

He smiled, returning to the present moment, understanding that everything had a time. One day, one moment, his essence would escape this world, blink from existence to another level of energy. He had plans, he had wishes and, in a few more months, his work would be complete and he’d allow his energy to once again be released into the world.

For now, however, he had accepted that he was… alone… and that wasn’t a bad place to exist at all.