Sandra splashed the water, which sent Aiden and Jake into fits of laughter and joy. She adored moments such as this, as they warmed her soul. She looked surprised, as her hand moved down the side of the bath.

“What have I found?” she uttered with glee and high energy.

The two boys gazed at their Mother, waiting, bracing themselves for whatever appeared next. 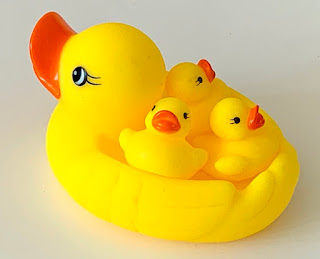 The boys, once again, splashed the water as their gurgles, laughter and smiling faces filled the room with beautifully positive energy. The simple things in life, right there, in the moment.

“…and another rubber duckie?” said Sandra, raising a second rubber duck from her right side. Both of them were to be treated equally, both provided the essentials to ensure stability, care, affection and love. The splashing intensified until, at last, Sandra presented each of them with the duck. They both grabbed hold of the item, staring at the colours, the shape, the absolute satisfaction of a new experience. Sure, they’d seen toys before but this, THIS, was special.

“What do ducks say?” asked Sandra.

Once again, they boys laughed, as Jake dunked the duck under the water.

Sandra looked at her watch, her time just about to end.

“Okay boys, Mummy will see you again tomorrow and you both know what tomorrow is?”

Aiden, once again, replied with an illegible noise which might have made sense to his own thoughts.

“Close, but it’s chopped up carrot and sweet potato day!”

Jake’s mouth immediately started to dribble at the thought of such things, as sweet potato was his absolute favourite.

All at once, the two boys vanished, as Sandra pulled the plug from the bottom of the bath. She scooped up the two ducks, as well as the various other items, placing them into the plastic container to the side of the bath. She thoroughly enjoyed the time she spent with them, holding and embracing every single second as if it were her real life. Sadly, it wasn’t.

She felt the empty feeling rise within her stomach, chest and heart, as there was simply no way around the situation. Each allotted visit, based on the amount of electrical power within a building or habitat, stated the amount of time she would have. Fifty people in the building, divided by the number of rooms that required access to children, meant that she simply had one entire hour.

She wasn’t, as she knew, a part of the privileged that were legally allowed to have children. Ever since the blackout, the changes, the food shortages, she would have thought that there would be a baby boom. Such wasn’t the case, to her dismay at first hearing about the new law.

She stood, walking from the bathroom, closing the door as she went. She sat at the kitchen table, her tears again reaching her grief and dismay. She smiled a bitter smile, her heart aching, with her only solace being that she was thankfully allowed to be born in the first place.