Simon’s eyes blinked a few times, his hand reaching up to wipe away the water upon his face. He focussed, startled, shocked, not quite understanding how he came to be in such a place. One moment, sun filled skies, solid ground underneath his feet and the next, he’s in a rowing boat in the middle of a stormy sea. 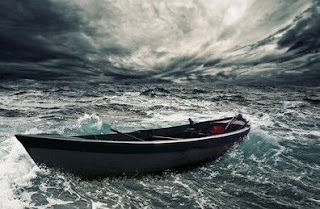 His hands reached out, grabbing hold of the oars, not quite understanding the situation or what he was supposed to do. His head turned to his left, then right, trying to locate some type of sanctuary, a respite, a place of safety. He focused his mind, trying to reach inward to find calm. For a second, he believed, he actually believed, that he’d be okay. The weight of the situation, all at once, pushing against his shoulders and thoughts.

The next second, mighty thundering lightning cracked throughout the sky, sending him slightly backward into the boat. His back, pressed against the cold wooden surface, found a form of stability within the calm. He felt his mind juggle a thousand moments, a million emotions, as he once again tried to find some form of rescue. It was, as he currently knew, unlikely that it would be found.

The denial, the words of solace within him, sent out a thousand messages, a million words, in the hope that some type of angel would remove his solitude. The voices above remained silent, with another thundering event sending flashes through the night’s cold. There were no angels within his scenario, no rescue, only his thoughts, his body and himself.

He cried, the sudden tears rising within him as he lifted his head to peek over the side of the boat. The waves were growing, angry waves, that seemed to be calling him names. He was worthless, his self-esteem falling to the very lowest level of emotional stability, as he succumbed to the demands of his situation. It was a worthless effort, hopeless, no matter how much he tried to move the boat. He defeated himself, without even trying, once again, to move to safety.

His tears joined the boat’s influx of water as, finally, he realised that he had to remove some weight. Even tears held their weight within his mind, which meant that he should cry, instead of leaving within the burden of fear. With both hands, he tried to remove the water. It was, to his mind, more or less hopeless. The weight of the situation, his world, seemed to be filling the boat faster than he could throw aside the growing boat’s content.

He wanted to give up, to escape the boat, to simply let the waves take him to the depths of darkness. He had, more or less, given up. The darkness, the weight, the thoughts, the feelings and worth inside, all combining together to seemingly crush his self-esteem, hope, self-worth and emotional sanctity. He closed his eyes, as his hands continued to throw as much water over the side as possible. He refused to stand still. He refused to simply let the darkness, the thunder, the wild sea of life take him. It would be easy to simply deny the willingness to continue. It would be quicker to just end his suffering.

He gritted his teeth, with tears still falling around him, as he grabbed the oars. He would at least try, he would at least envision dry land, until the very last breath left his soul. He repeated positive words within his mind, over and over again, as he calmed his body. Breathing in, slowly, deeply, as he exhaled with each movement of the boat. Little by little, slowly, surely, with each row, he found a small amount of peace. He didn’t wish to open his eyes, but he did so regardless of his fear.

He wanted to smile, to believe, that there would be an island behind him but, instead, he felt the fear rise within, which was confusing. Hope, to be happy for even a second, filled him with fear. If he felt a smile upon his face, the boat could crack, a wave could take him at any second, or the thundering light could strike him down. He wanted to smile, to laugh, to find the situation, one of madness. He couldn’t, he dared not tempt the anger of the universe. To even think of hope, at this time, could mean disappointment within the very next second.

He shook his head, the rain saturating every inch of him, as he finally dared himself to smile. He couldn’t, he wouldn’t and most certainly shouldn’t let the wild seas take him away. He was on dry land, filled with sunshine, barely seconds before and the next, this place. He knew that life featured roaring seas of turbulence, but what he didn’t expect was how suddenly it appeared. Within a second, the madness had gripped him. Within a moment, he’d lost so much of his very person, to fear, to loss, to having to learn and adapt. It was an experience that he’d never forget, if he survived.

As his mind, heart and most certainly soul, grasped the thought of effort and persistence, the lightning stopped. He dared not look to the sky, still afraid to tempt the fate of happiness. He continued adapting, learning, understanding his situation and, with each movement, the sky started to clear as the waves calmed.

He still wouldn’t smile, internally, despite the exterior showing just that. The illusion of a smile, hiding so much. He looked behind him, realising that the next few seconds would bring him to safety and then, as the boat touched dry land, he jumped up and threw himself onto the sand filled beach. He’d made it, he’d managed to make it through the turbulence, the sadness, depression and uncertainty. As his hands pushed into the sand, his smile vanished as he realised, that his situation would now require reflection, study, understanding and energy. He would never wish to return to the boat, the place that caused him so much stress, fear, trepidation and sorrow.

He stood, glancing back one last time towards the boat and the sea. He was glad, in a way, as he realised that things would have been far, far worse, without the boat that his mind had placed him in.