The gangway touched the planet’s surface, the gentle, mild thud bringing such a realisation to each of their minds. A new planet, unexplored, not yet tainted by outsiders. They knew the rules, with the usual checks being implemented, as first contact was always a relatively precarious adventure. In this case, as far as they knew, the habitational animals were all lower forms of life. 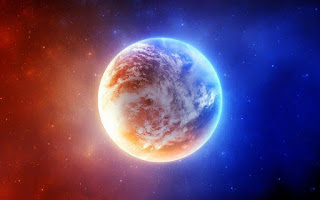 Selena couldn’t stand that form of thinking as, to her mind, all forms of life existed upon the same level of creation. Free will, free form, able to whatever their function defined for them. Simon, on the other hand, standing in front of her with his hand resting upon his side firearm, saw everything as a possible threat. Nigel, stood next to Simon, was the usual pessimistic man-child that disliked, corrupted, ridiculed and malformed whenever he could. A motley crew of three.

They all moved forward, one standard foot in front of the other, cautious as usual. She’d heard the stories, especially what happened on Rigel 3 all those years previous. A guy nicknamed ‘Shark’ had stood on the tail of a Primerium land zipper and regretted it. They found pieces of his body over a two-mile radius. Caution was, in her mind, key.

She felt her feet finally press against the planet’s surface. Immediately, from within her, she felt a certain calm, an elegant furrow of pleasing emotion making her heart seemingly glow. She’d never felt such stillness before, her interest instantly peaking, as she removed a scanner from her side satchel. The gentle buzz of animals, all around them, seemed to add to the relaxation within.

The other two, walking forward a few metres, started to annoy each other. Their words faded away into the distance as she concentrated upon the readings produced by the scanner. Graphs and stats appeared in front of her eyes, her mind consciously attempting to understand the feelings rising within her. She glanced to her side, as a small flying creature, the size of a butterfly, made its way to a colourful flower. She watched as the creature collected, what she presumed, was pollen. The process of life, right in front of her eyes. Then, from behind her, she felt a slight nudge.

Turning, she stiffened slightly, as an animal the size and shape of a medium sized dog, looked up at her. She knelt, knowing full well that the situation could escalate at any second, but within her she felt safe, secure, relaxed at the unfolding events. She slowly raised her hand, with outstretched, flat fingers. Gently, she placed her hand under the creature’s chin and then, with a smile, gently rubbed with her fingers. The animals face softened even more, as its eyelids closed ever so slightly, as a hind leg moved to scratch its side.

She laughed a little, realising that some things never changed. Dogs, cats, whatever this was in front of her, all beautiful and endearing to a heart such as hers. From behind, she heard a familiar sound and, as she moved her upper body around to stop the event, she realised that it was far too late. Simon, weapon pointed at the animal, fired. She heard a whimper; the animals body falling to its side and then silence. She turned back to the creature, her sorrow, anguish and emotional distress apparent upon her face. The innocence, gone. The moment, senseless.

She placed a hand upon the creature’s face, her emotions expressing the regret of the event, as the life escaped its body. She pulled her hand back quickly, as she witnessed some sort of essence, spirit, or maybe even a soul, move from the creature’s body. She’d never seen anything like this before, as she regained her mind of science. She lifted the scanner, pressed a selection of buttons and, as suspected, the realisation of this place hit her mind.

A second escaped as her thoughts bellowed through her mind and at that moment, she realised something. The gentle hum, the creatures around them, had stopped. Silence. Bleak, unadulterated silence. The calm within her suddenly sensed the complete change in emotional vibration, her eyes looking for any sign of movement.

“Get back to the ship!” she exclaimed to Nigel and Simon. Without question, also sensing the change, they immediately did as requested. Their aggression had to be removed, as their very energy was not suitable for such a place.

From all around her, animal appeared, hundreds upon hundreds of animals of all shapes and sizes. She rested upon her folded legs, realising that the situation in front and all around her was unavoidable. Her scanner beeped and, as she glanced down, the realisation struck her. Her imagination, her bewilderment, all joined together as her thoughts gathered and understood the planet’s frequency. Five hundred and twenty-eight hertz. The frequency of love. The equilibrium of peace and harmony, the very planet’s energy resting and creating the feeling of love and connection. A pure emotion, not tainted by human selfishness or any other trait. Everything upon the planet was emotionally aligned.

She engaged her own emotions, realising that events could escalate. Her sorrow, the regret for what had just happened, her love for all creatures, rose within her. Her chest glowed with emotional clarity, with her soul glowing with radiant vibrance and colour. She placed her hand onto the deceased animals face, expressing the loss within her, the sadness echoing her thoughts into the world. Her vibration, her very frequency, matched their own.

As a moment passed, a selection of animals leant against her, connecting with her essence, as two other creatures carried away the lifeless vessel in front of Selena. The moment, gentle. The loss, all but real. She felt them, experienced the flow of energy, embracing her very essence and purpose. She felt a part of herself drift, the connectivity arriving to her energy points, as her mind quickly snapped her back to reality.

The savage nature of man, the brutal fear of anything other than what they knew, resounded within her. This place was a pure bastion, beautiful, peaceful and, most of all, out of bounds for her kind. Despite the resources the planet would provide, she had no intention of allowing such a place to be desecrated. She tapped the screen of her scanner, as the animals slowly disbanded, the gentle hum returning to normal. She scrolled through the options until, finally, tapping the word ‘quarantined’.

She would not, never, ever, allow this place of beauty to be destroyed due to the whims of man, machine and greed. She realised that her judgement, of course, was compromised, but such beauty, peace and calm had to have a place and if it was to be this one planet, she would accept that conclusion. She closed her eyes, as she stretched out her arms, once again, feeling the peace and love all around her. The unity, energy and calm, to which she’d never, ever, experienced before.

This place, this planet, deserved a suitable name and as her mind flowed with the beauty of such a love, a single word reached her lips and, as she opened her eyes, heart, soul and mind, one word appeared. This word, the expression of feeling, was harmony.