Licking his lips, just after exhaling the cigar smoke, he placed a finger ever so slightly above his head for what appeared to be less than a second. Watching the smoke move through the air, he held the dice between his fingers, quickly capturing the numbers and their position. The numbers flew through his mind and he settled on the digits required. 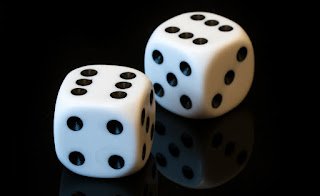 Double deuce, to many, was not the most important number but, right now, it was all he needed. He called it, spoke the numbers and there was no going back. The noise, within the area, settled to a calm buzz and as he threw the dice at a specific angle, while leaning towards his son, he whispered, “You see son, it’s all about the specifics in this life.”

The dice flew, almost reaching slow motion to the people gathered around the table. With the brief second, which is all it took before the dice started to bounce across the surface, he blinked and rested his hands onto the edge of the table. A sudden calm feeling reached his mind, a resting feeling, almost the same as a running water tap being turned off. Two bounces, maybe four, are all that the gatherers witnessed before they all focused on the dice.

The uproar nearly filled the entire place. The dice, exclaiming their number in virtual silence, screamed the double two that he’d predicted. He’d smile, maybe even dance a little dance, but any further attention, at this point, would not be warranted or required.  “Shall I add the winnings to your account Sir?” the host asked, to which a nodding head replied.

A small smile broke free, from his cast iron resolve, as he stepped away from the table taking his Son with him. “How do you keep on doing this, time after time?” his Son asked, realising that he’d never actually heard the solution the previous ten times he’d asked. As they reached the doorway, with a brief look behind him, they stepped out into the street. He realised, now that his Son had reached the age of understanding, that maybe it was time to explain everything.

Looking into his Son’s eyes, while slowly walking, he started to explain, “Maybe it is time. I know that you think that I’ve been cheating all…”
“I don’t Dad, not at all,” his Son interrupted, “Sorry, carry on!”
He could literally feel his Son’s interest escape from every single pour of his being, which was a good thing but, hopefully, he also had the resolve to see things through. Life wasn't easy, often cruel, but even worse than that is a mind going to waste. “What you see, is the dice fly through the air, coming to rest and the correct number appearing. What you don’t see, are the angles, the air within the room, the people around the table, the weight of the table, all of the opportunities to gather as much information on how the dice will land. You, as well as I, have a brain that can compute any number of outcomes. We've been to the Moon, we've split the Atom, so surely, honestly, you, or I, can gather information to ensure that the dice land exactly as they’re called?”

His Son, stopping in near disbelief, looked slightly confused as he tried to work through what was just said, “You, literally, figure out the amount of dice bounce, from just standing there?”
“It’s as simply as that. How hard will I throw the dice, with different surfaces presenting a different outcome. We've a veritable calculator up here Son,” pointing to his head, “which is left to rot. Filled with such rubbish that rests with us until the day we die.”

A great, big, silly smile appeared across his Son’s face finally, after all this time, realising that it wasn’t magic, or cheating, but actual talent. It moved him. “Can you show me?” he asked.
“Starting tomorrow, I will. But,” his Son’s smile slightly fell in fear of what was to be said next, “when you’ve analysed, figured everything out to a precise fashion, there’s the most important aspect that bonds it all together. Through failure, trying again and again, we realise that pure intelligence, or even just using what we have, is not enough without the heart. The heart forms and completes everything. Without that heart you cannot read the room, feel the room, know when to quit or to carry on. It’ll keep you going when your mind lets you down. When the world lets you down!”

Nearing the subway, he realised that there was a lot to learn, with many months ahead of them both, but he also knew that the mind could be used for so many other tasks. He’d decided on throwing a dice after his day job, but what would his Son truly become. No matter what he knew, what he said, he still couldn’t see the actual future. Sure, he rolled the dice, made his bets, judged the odds and won, but this wasn’t about his life. He turned to his Son, looking straight into his eyes while calmly asking, “Are you ready to roll the dice on life Son?”  His Son nodded, smiled, smirked a little, knowing that the future was about to get much more interesting. Besides, no matter what happened next, he knew that a mind was a terrible thing to throw away. It was, as his Father said, time to role the dice on life. Now or never, his numbers had arrived and he was going to embrace this path with vigour.


How are you going to roll the dice today?
Posted by Damian Jones at 09:24