Elfie skipped along the path, with Dash following closely behind, gathering quite a pace with each skip. Having fun, while singing one of their odd songs, being naughty as usual. At the top of his voice, Elfie sang with Dash, repeating, “Give me an N then an A with a U, shout a G with a H with a T for me and a Y for you! What do you have? NAUGHTY!” 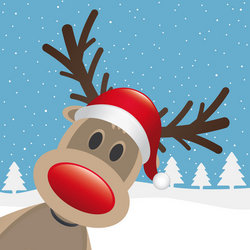 Their words echoed through the trees, their naughty verse probably causing a curse but, as they neared the edge of the tree line, they could see the tundra start to appear… the home of the reindeer. Naturally they roamed around, if they weren't flying high above the clouds, but since becoming friends with Father Christmas, all those years previous, the Elves built some beautiful stables complete with flashing lights and a disco deck. The Elves liked music, especially Christmas music, but the Reindeer simply insisted on music at all times.

The skipping stopped as Elfie and Dash approached, their vision filled with the many flashing lights and ever present music blaring. The song was one of their favourites, especially when wrapping presents, so their joy reached new levels. Walking past each Stable they read the names aloud, “Dasher, Dancer, Prancer, Vixen, Comet, Cupid, Donner, Blitzen and,” they both paused, filled with wonder and excitement as the last name appeared, “Rudolph!” Looking at each other, their red cheeks glowing and hands, raised into the air, waving around.

They’d only met Rudolph once before, at a Christmas disco, but weren't feeling naughty enough to push past everyone else to say hello. This, of course, was a long time ago and now, right now, they were more than naughty enough to say hello. With Elfie stood slightly to the right of the door, Dash to the left, they both raised a hand and knocked as hard as they could. As soon as they stopped knocking they both spun round to place their backs to the wall. The door opened and they both gasped as Rudolph’s bright red nose appeared, “Hello, who’s there?” said Rudolph. With naughty intent, Dash reached out and prodded Rudolph’s nose as, at the same time, Elfie did the same. A double side nose prod was one of their best moves!  Stepping forward a little more, with a sore nose, Rudolph appeared, looking left, then right. Shaking his head and closing his eyes, he knew that they were here for something naughty. “You two… you’d better come in before you catch a cold from sneezing on each other!”

Elfie, standing on a chair without being asked, bounced up and down listening for the spring noise as Dash wormed his way across the floor on his back. Rudolph, still shaking that head of his, switched the kettle on and looked at his nose in the small mirror on the wall. “Okay you two, what would you like as I'm sure that this isn't a social call? Candy perhaps?” Elfie, still bouncing on the chair, shouted,
“A fleck?”
“A fleck?” Rudolph repeated,
“A fleck!” said Dash.
“A fleck?” said Rudolph as he looked confused.

As Elfie bounced even higher, on the way down, his leg crashed through the chair’s soft cushioning and the spring flew from under the chair. They all watched as it shot through the air, smashing through the window behind Rudolph. Elfie, pulling his leg free, shot across to the next chair, sitting while whistling a tune of ‘It wasn't me’. Rudolph, expecting nothing less from an Elf visit, sat and, sipping on his Winter grey tea, asked in a calm voice, “What is this about a Fleck?”
“We need a fleck of hoof, from a reindeer!” stated Dash who had also stopped being naughty.
“Who sent you?”


“Jack sent the both of us to find you!” shouted Dash, as he dug into the side of a chair, eventually  finding a chocolate snack.
“Ah, Mr Frost. In that case you’ll have to do one thing for me before you can have your fleck.”
Alfie, suddenly excited, blurted out suggestions, “Eat candy until my belly explodes? Wrap presents until my hands hurt? Trip 20 friends and laugh at them?” Rudolph, with a smile, muttered words under this breath before continuing,
“I’d simply like you both to learn a new dance!” Dash stood, virtually at the same time as Elfie, both literally wanting to explode at such a task. They loved dancing. It was one of their favourite things in the world and, if they were honest, their favourite thing in the world would actually be dancing, while wrapping presents.

Placing the cup onto the table beside him, pressing the play button on the record player, Rudolph walked into the middle of the room, as Elfie and Dash joined him. Dash to his left and Elfie to his right. “The dance is easy,” Rudolph explained, “so copy me and we’ll see if we can get it right!”

Rudolph stepped to the right and the two copied him. He then stepped to the left, jumped up clacking his hooves together, the fronts to the rears, landing back firmly onto the floor. Both Elves stood still, partly with wonder at such a move, but mostly in admiration for Rudolph. At that exact moment, they knew why he was head Reindeer. As the wonder started to fade Elfie looked at Dash, both knowing what to do, as they both jumped into the air, bringing their legs up and slapping their feet against their hands.

Over the next ten minutes they both danced, copied, danced some more and, finally, managed to complete the dance with absolutely no mistakes. They were tired, possibly all out of ‘naughty’, but Rudolph knew that they’d get that back soon enough. Trotting over to the fire place, lifting his leg slightly, Rudolph brought his hoof down onto the edge of the brickwork and a small amount of Hoof fell away. He was due for a nail cut anyway so this was actually helping him, “There you go you two, a nice small ‘fleck’ for you both. Be good, be polite, don’t be too naughty and dance as shown at the Christmas party!”  Both Elves smiled from ear to ear, as they were handed their prize. Mission accomplished and, before Rudolph could say anything further, they’d ran out of his house, slamming the door as hard as they could, smashing the other small window in his room.